Widespread acceleration of tidewater glaciers on the Antarctic Peninsula

Using radar images acquired by European ERS-1 and ERS-2 satellites, we tracked the flow rate of over 300 previously unstudied glaciers. We found a 12% increase in glacier speed from 1993 to 2003. These observations – that echo recent findings from coastal Greenland – indicate that the cause is melting of the lower glaciers, which flow directly into the sea. As they thin, the buoyancy of the ice can lift the glaciers off their rock beds, allowing them to slide faster. These results show that the Antarctic Peninsula is currently contributing about as much to sea level rise as Alaska, and that Antarctica as a whole is now a net source of sea level rise.

In February this year, the United Nations Intergovernmental Panel on Climate Change (IPCC) reported that they could not provide an upper limit on the rate of sea-level rise from Antarctica in coming centuries because of a lack of understanding of the dynamics of the large ice sheets. These results demonstrate that glacier dynamic effects are likely to be a key control on sea level. They pave the way for more reliable projections of future sea level and provide a better basis for policy decisions. 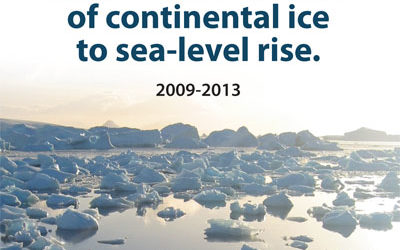