Two studies published in a special issue of the journal Science Advances this week (27 November 2019) highlight the fragility of the Antarctic and its ecosystems in the lead up to the UNFCCC COP25 meeting in Madrid next week.

The first study, involving scientists from British Antarctic Survey (BAS), explores the integration of climate change considerations in the global network of Marine Protected Areas, and how this can contribute to ensuring a sustainable ocean future.

Little is known about how well MPAs account for climate impacts, or how climate adaptation can be improved in the global MPA network. A key finding shows that the proportion of marine protected areas that account for climate change cannot be accurately measured, since there is no repository that holds this information.

Developing a database to track climate adaptation plans in MPAs is one of eight recommendations that the researchers present. They also recommend the development of new dynamic management tools to allow a more rapid response to climate impacts.

“The impacts of climate change and biodiversity loss are two of the most significant challenges facing our oceans, yet the policy agendas for these issues have tended to be developed independently. There is now an urgent need to actively integrate climate change as a core consideration in ocean conservation and management.” says BAS ecologist scientist Dr Rachel Cavanagh.

Another crucial component of climate-smart conservation and management is that it is centred around building capacity in regions with limited resources, and around inclusiveness, bringing stakeholders fully into the discussion and the decision-making process.

“Establishing marine protected areas (MPAs) that are responsive to climate change is especially important in the Southern Ocean, where the marine ecosystem is already changing rapidly. These new recommendations can help to improve the way in which MPAs are used to address both biodiversity conservation and climate adaptation.”

The second study also published in the journal Science Advances, is a review by BAS scientists. It discusses how Antarctica’s unique and delicate ecosystems face the dual problems of climate change and direct human impacts, in particular the accidental introduction of non-native or ‘alien’ species.’ The scientists analysed existing literature on the environmental challenges facing the continent and the Southern Ocean.

The study reaffirms the importance of all parties of the Antarctic Treaty continuing their commitment to governance of the region, as it still contains the best mechanisms to protect and preserve the environment. The scientists praise the establishment of the first genetic database of Antarctic species in New Zealand and recommend this is extended to create a comprehensive genetic archive for future generations to use.

The Southern Ocean has some of the highest levels of biodiversity in the globe, second only to that of coral reefs. In contrast, Antarctica’s terrestrial ecosystems include some of the least diverse on the planet. However, both have long been effectively cut off from the rest of the world, leading to evolutionary radiation and adaptation to it unique environments.

“Numbers of visitors to Antarctica is still relatively small, with around 50,000 tourists and 5,000 research staff per year. There has been no recorded establishment of non-native marine species around Antarctica, however, its terrestrial ecosystems are already feeling the serious impacts these can have, especially on the sub-Antarctic islands. Climate change and increasing human activity in the region can act together to drastically increase the likelihood of non-native species establishments, providing an urgent challenge that the Antarctic Treaty System’s governance system must respond to quickly and effectively in order to fulfill its responsibility of effectively protecting Antarctica’s unique ecosystems and biodiversity.” 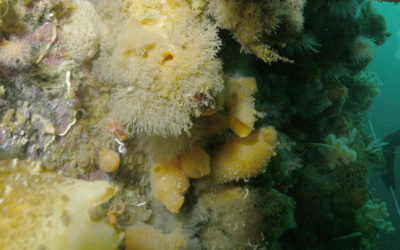