A section of the world’s largest ice shelf in Antarctica – around the size of  Spain – is melting 10 times faster than average and warm ocean currents beneath it are to blame, a new study reveals. The findings are published in the Journal Nature Geoscience this week (29 April 2019).

A team from the National Institute of Water and Atmospheric Research (NIWA) in New Zealand, University of Cambridge and British Antarctic Survey, studied the north-western corner of the Ross Ice Shelf to build up a record of how it is melting, and the key processes driving it.

“We’ve shown that the ocean is melting the north-western corner of the Ross Ice Shelf much faster than the rest of the shelf, and a lot of that melting is linked to summer heat from the top layer of the ocean.”

The findings are significant because the stability of ice shelves is generally thought to be related to their exposure to warm deep ocean water. However, the study shows that surface ocean heat also plays a crucial role.

Although the interactions between ice and ocean occurring hundreds of metres below the surface of ice shelves seem remote, they have a direct impact on long-term sea level. Floating ice shelves stabilize the ice sheet, and loss of the major ice shelves would lead to accelerating ice flow and sea level rise of several metres or more. Currently the largest ice shelves are melting slowly; but smaller ice shelves that float in seawater just 3 degrees above the freezing point are melting 100-200 times faster, showing the impact that warm ocean water can have.

The team collected four years of data from an oceanographic mooring installed under the Ross Ice Shelf with instruments measuring temperature, salinity and currents. The mooring also included an echo-sounder pointed upwards at the bottom of the ice to measure melt rates.

Installing the mooring required drilling a hole through 260 metres of ice and then lowering it into 600 m of ocean beneath the shelf. In addition, the team used extremely sensitive custom-made radars to survey the changing thickness of the ice shelf.

“What’s interesting from this study is how we’ve shown that the Ross Ice Shelf is melting near a major pinning point, which is mainly driven by summer surface warming.  These ice front pinning points help control the flow of a lot of Antarctic ice shelves, and so the study demonstrates another vulnerability of ice shelves to climate change.”

Information from the instruments deployed on the mooring showed that warm water from the upper layer of the open sea transports heat into the cavity under the ice shelf causing melt rates to nearly triple during summer. The melting is affected by a large ocean expanse in front of the Ross Sea Ice Shelf that is devoid of sea ice due to strong offshore winds. This area, known as the Ross Sea Polynya, absorbs solar heat quickly in summer and in turn influences the ice shelf cavity.

“This study builds our understanding of the important but rarely observed processes that drive melting of ice shelves. Understanding and monitoring these processes is critical to predicting the future of the ice sheet and global sea level.”

Basal melting of Ross Ice Shelf from solar heat absorption in an ice-front polynya is published in Nature Geoscience. Read it here 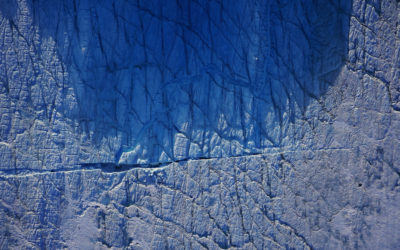