RRS James Clark Ross arrived at Signy Island on 15 December. Signy Island is one of the remote South Orkney Islands, which lie more than 1300 km from the Falkland Islands, 900 km from South Georgia and 600 km from the Antarctic Peninsula. The team are working to open up Signy Research Station for the summer season.

RRS James Clark Ross has departed from Bird Island, South Georgia, after a busy few days unloading supplies for Bird Island Research Station. The ship is now heading back to the Falklands to-resupply.

The RRS James Clark Ross has arrived at King Edward Point, South Georgia and the South Sandwich Islands, after sailing south from the UK. For the staff disembarking at King Edward Point, this represents the culmination of a journey that started in quarantine in the UK in October to enable safe travel. Summer support staff, and wintering staff for 2021 are travelling south by ship this year following disruption to normal travel routes due to COVID-19, and the importance of keeping Antarctica virus free.

The ship will drop off the station teams, food, fuel, scientific equipment and medical supplies at King Edward Point and Bird Island before heading into the Falkland Islands to re-supply. RRS James Clark Ross will then stop at Signy Research Station, before reaching Rothera Research Station in late December.

ORIGINAL NEWS STORY 08/11/2020: The RRS James Clark Ross departs the Port of Harwich today (Thursday 5 November) beginning its five-and-a-half-month mission to deliver scientific and operational staff to Antarctica, and to resupply the UK stations in Antarctica for another year.

Seventy members of staff are on board, made up of the ship’s crew, summer support teams and the 2021 wintering station teams. To maintain safety, everyone spent two weeks in quarantine before joining the ship.  Each person had three COVID-19 tests during that time.

The ship will spend seven weeks sailing from the UK to King Edward Point and Bird Island research stations, dropping off the station teams, food, fuel, scientific equipment and medical supplies before heading into the Falkland Islands to re-supply. She will then stop at Signy Research Station, before reaching Rothera Research Station in late December.

From Rothera, a team of 10 staff will fly to Halley Research Station to spend four to six weeks collecting data, servicing the scientific instruments and maintaining the station infrastructure before flying back to Rothera. At Halley, core scientific data can be collected year-round through the Halley Automation Project. Autonomous scientific equipment around the station and on the Brunt Ice Shelf collects information on weather, climate and the ozone.

The RRS James Clark Ross will return to the Falkland Islands before making a final call at all four stations to collect the station staff and scientific samples before sailing for the UK. They will leave behind only the wintering teams at Rothera, King Edward Point and Bird Island who will spend 12-18 months on station without returning home.

“This will be a season like no other. COVID-19 continues to present BAS with exceptional operational challenges and our priority is keeping our staff and collaborators safe, and keeping Antarctica COVID-19 free. We will maintain all our data monitoring so there will be no gaps in our long-term collection of weather data, ice-sheet information and wildlife statistics.”

The 2020/21 season will be shorter than usual with no crew change, to ensure the ship and Antarctica remain COVID-19 free. The RRS James Clark Ross will arrive back in the UK in March 2021.”

A small construction team and support staff will also travel to Antarctica to complete the groundworks for the new science and operations building at Rothera Research Station, the Discovery Building. This is part of ongoing work for the Antarctic Infrastructure Modernisation Programme. They will travel to Antarctica by a chartered ship at the end of November and return in early April. 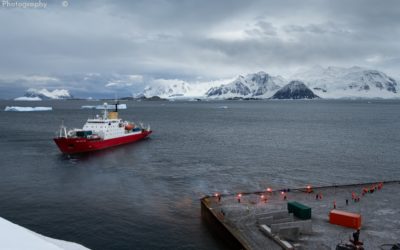