Rock lobsters may have lived further north in the past, and may be vulnerable to climate change in the future, according to a new study published this month (March 2021).

British Antarctic Survey (BAS) scientists were part of a team that examined the Tristan and St Paul rock lobster species that inhabit seamounts and islands in the southern Atlantic and Indian Ocean respectively – separated by thousands of kilometres.

“Using a combination of oceanographic models and genetics we identified present-day larval transport pathways, which showed connectivity from west to east between lobster populations in the Atlantic and Indian Oceans. However, we also found that patterns of connectivity have changed over time as the climate fluctuated.

“We think the lobsters moved northward during the last ice age, 20-25,000 years ago, when temperatures were colder. With temperatures increasing due to climate change, the lobster populations may move southward where suitable habitat is available to stay within their preferred temperature range, which will make management of the fishery more complex.”

The species live in a narrow range of temperatures, about 8–18°C.

Co-author Dr Strugnell from James Cook University in Australia said this finding had implications as water temperatures in the region are increasing.

“There is already some evidence of this happening elsewhere, with the eastern rock lobster becoming more common further south along the Tasmanian east coast.”

She said the sub-Antarctic Islands of the Indian Ocean could become suitable habitats for lobster.

Ocean currents are projected to change worldwide by the end of the century, which could also affect the drift of larval lobster between the South Atlantic and the Indian Ocean.

This research was conducted during a project that included two ship cruises to the island of Tristan da Cunha. It feeds into the wider goals of providing information for the Tristan Government to manage sustainable harvesting of the lobster into the future, providing food and economic security to this remote UK Overseas Territory population. 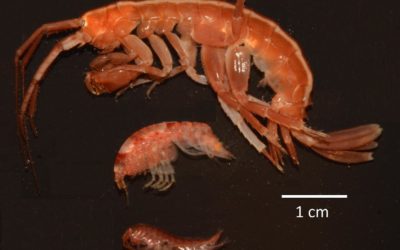