Heavy sea ice conditions have thwarted a science mission from reaching the Larsen C Ice Shelf in Antarctica from which a large iceberg broke off in July 2017. A team of scientists, led by British Antarctic Survey (BAS), are travelling on board the RRS James Clark Ross.  Sea ice, up to 4-5 metres thick, has made progress for the ship very slow. On Wednesday (28 February) the ship’s captain made the difficult decision not to continue.

“We knew that getting through the sea ice to reach Larsen C would be difficult. Naturally, we are disappointed not to get there but safety must come first. The captain and crew have been fantastic and pulled out all the stops to get us to the ice shelf, but our progress became too slow, with just 8kms travelled in 24 hours and we still had over 400kms to travel. Mother Nature has not been kind to us on our mission!

“But we have a ‘Plan B’, we will head north to areas which have never been sampled for benthic biodiversity. The Prince Gustav Channel Ice Shelf and neighbouring Larsen A Ice Shelf collapsed in 1995. We’ll be sampling deeper than we planned at Larsen C – down to 1000 metres – so we’re excited about what deep sea creatures we might find.”

The international team, from nine research institutes, will spend the remainder of their mission collecting seafloor animals, microbes, plankton, sediments and water samples using a range of equipment, including video cameras and a special sledge pulled along the seafloor to collect tiny animals. Their findings will provide a benchmark of the seafloor biodiversity in this area and provide a more accurate timeframe for retreat of ice sheets from the eastern side of the Antarctic Peninsula.

Researchers are already planning more missions to access the Larsen C ice shelf. Dr Katrin Linse and colleagues have teamed up with the Alfred Wegener Institute in Germany to visit in 2019 on their research vessel the RV Polarstern. 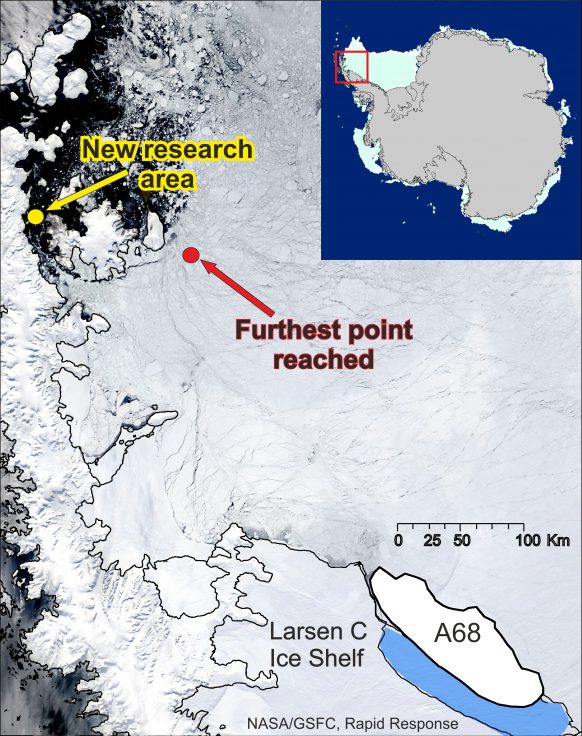 The research expedition to the Larsen C Ice Shelf is funded by the Natural Environment Research Council (NERC). The giant iceberg known as A68, which is four times the size of London, calved off from the Larsen Ice Shelf in July 2017. The scientists planned to collect samples from the newly exposed seabed, which covers an area of around 5,818 km2.