The core from Dome C, high on East Antarctica’s plateau, contains snowfall from the last 740,000 years and is by far the oldest continuous climate record obtained from ice cores so far. The ice has been collected in an eight year project by scientists and engineers from 10 European countries. Analysis of ice cores shows how temperature changed in the past, but also how the concentrations of gases and particles in the atmosphere varied. The first results confirm that over the last 740,000 years the Earth experienced eight ice ages, when Earth’s climate was much colder than today, and eight warmer periods (interglacials). In the last 400,000 years the warm periods have had a temperature similar to that of today. Before that time they were less warm, but lasted longer. By comparing the pattern of this past climate with global environmental conditions today the scientists conclude that, without human influence, we could expect the present warm period to last at least another 15 000 years. Dr Eric Wolff, from British Antarctic Survey says: “It’s very exciting to see ice that fell as snow three-quarters of a million years ago. These results tell us that we won’t have an ice age any time soon. However, we may have a heat wave if we are unable to control CO2 emissions and other greenhouse gases entering the atmosphere. Our next step is to investigate CO2 in the ice cores and by understanding what has driven the natural changes seen in the ice record, we will create better models to predict how climate might change in the future.” The next step in the research is to extract air from tiny bubbles in the ice, and to find out how the atmosphere’s composition has varied. Preliminary analyses show that the present carbon dioxide concentration is the highest level seen in the last 440,000 years. By understanding what drove past changes in climate, the scientists expect to improve predictions about future climate. The Dome C drilling is part of the ‘European Project for Ice Coring in Antarctica’ (EPICA). The team at Dome C endured summer temperatures as low as minus 40?C at the remote drilling site over a thousand kilometres from the nearest research station. The consortium will continue to drill at the site from December 2004, and hopes to reach the rocks at the base of the ice sheet. There are just 100 metres still to drill, and if all goes well, the team will reach ice over 900,000 years old at the base. -ENDS-

NOTES TO EDITORS: ‘Eight glacial cycles from an Antarctic ice core’ is published in the journal Nature on 10 June 2004. EPICA (European Ice Core Project in Antarctica) is a consortium of 10 European countries (Belgium, Denmark, France, Germany, Italy, Netherlands, Norway, Sweden, Switzerland, UK). EPICA is coordinated by the European Science Foundation (ESF), and funded by the participating countries and by the European Union. The EPICA research team is using the unique climate record from ice cores to investigate the relationship between the chemistry of the atmosphere and climate changes over the past 740,000 years, especially the effects of carbon dioxide, methane and other components of the atmosphere. The results will be used to test and enhance computer models used to predict future climate. EPICA’s aim is to drill two ice cores to the base of the Antarctic ice sheet, one at Dome C, and the other in Dronning Maud Land. Both drillings hope to reach their aim in the next 2 years. The ice cores are cylinders of ice 10 cm in diameter that are brought to the surface in lengths of about 3 metres at a time. Snowflakes collect particles from the atmosphere, and pockets of air become trapped between snow crystals as ice is formed. Analysis of the chemical composition and physical properties of the snow and the trapped air, including atmospheric gases such as CO2 and methane, shows how the Earth’s climate has changed over time. The Antarctic fieldwork is challenging both scientifically and environmentally. Dome C (75? 06’S, 123? 21’E) is one of the most hostile places on the planet, and average annual temperatures are below -54 degrees Celsius. Researchers travel by tractor over thousands of kilometres of featureless snow where blizzards are common. The 20 million Euros project ‘European Project for Ice Coring in Antarctica’ (EPICA) is funded by the EPICA Steering Committee, The European Union and European Science Foundation. The British Antarctic Survey is the UK representative in EPICA. EPICA contributes to the BAS core science programme SAGES, which uses the information from Antarctic ice cores and sediments to recreate past environments. British Antarctic Survey is a world leader in research into global issues in an Antarctic context. It is the UK’s national operator and is a component of the Natural Environment Research Council. It has an annual budget of around ?40 million, runs nine research programmes and operates five research stations, two Royal Research Ships and five aircraft in and around Antarctica.

More information about the work of the Survey can be found on our website: www.antarctica.ac.uk 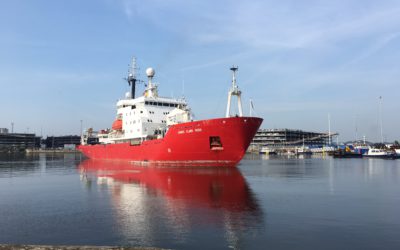 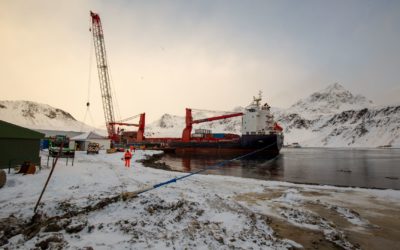