Norwegian and British scientists are to take part in a research project to determine how dependant non-breeding penguins are on krill. The project is to receive a £50,000 grant from the Antarctic Wildlife Research Fund (AWR) and will involve a collaboration between British Antarctic Survey (BAS) and colleagues at the Norwegian Polar Institute.

Most marine species in the Southern Ocean, such as whales, seals and penguins, rely on krill, a small shrimp like organism that forms the basis of the Antarctic food web. This particular research project will explore how much krill brush tail penguins (Adélie, Chinstrap and Gentoo) need to consume to survive.

Dr. Norman Ratcliffe, a seabird ecologist at BAS, is one of the scientists involved in the project:

“Satellite tags will be fitted to non-breeding penguins in the South Orkneys to map their foraging movements and overlap with krill fisheries, which have the potential to compete with penguins for food. The ecology of non-breeding penguins is largely undocumented, and so this project has the potential to inform us how their behaviour differs from that of breeding birds and what implications this may have for the management of Antarctic fisheries.”

AWR’s research programme specifications came as a result of discussions with research scientists who have considerable experience of working with the Commission of Antarctic Marine Living Resources (CCAMLR), the international body that regulates the fishery of Antarctic krill. 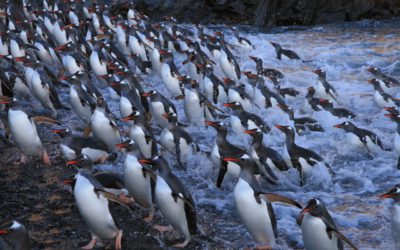