A team of British climate scientists comparing today’s environment with the warm period before the last ice age has discovered a 65% reduction of Antarctic sea ice around 128,000 years ago.  The finding is an important contribution towards the challenge of making robust predictions about the Earth’s future climate.

Reporting this week in the journal Nature Communications scientists describe how by reconstructing the Earth’s climate history through analysis of Antarctic ice cores they can determine what environmental conditions were like during ice ages and past warm periods.  This study focussed on sea ice conditions during the most recent warm period – known as the last interglacial – when global temperatures were similar to today.

Sea ice in the Arctic and around Antarctica regulates climate as, in summer vast areas of whiteness reflect heat from the sun back into the atmosphere, whilst in winter, sea ice prevents heat from escaping from the warm ocean to the air.  Current climate models forecast a reduction in Antarctic sea ice of up to about 60% by the end of the next century.  Finding a 65% reduction in the climate record during a time when global climate conditions were similar to the present day is especially relevant.

The research team from British Antarctic Survey (BAS) and from the Universities of Bristol, Reading, Leeds and Cambridge studied data from ice cores drilled on the East Antarctic Ice Sheet. A climate model was then used in the analysis of these data. The ice core data and climate model simulations were combined using advanced statistical techniques to determine the state of Antarctic sea ice 128,000 years ago.

“We know that the Earth’s climate is changing and that climate models predict a warmer world.  What we are not yet sure about is the precise magnitude of future change or the timeline.  This is where looking into the past can help.  We used a number of analytical techniques to quantify change in sea ice extent around Antarctica during this important past warm period.

“We were expecting to see a relationship between warm temperatures around 128,000 years ago and a past collapse of the West Antarctic Ice Sheet.  Surprisingly, we found that a major retreat of Antarctic sea ice is a more likely explanation. Our analysis suggests that a collapse of the West Antarctic Ice Sheet occurred later during the last interglacial. Something that our team will be looking at in more detail through another collaborative UK-US project.”

Today researchers observe differences between sea ice changes at both poles.  This is largely due to different geography – the Arctic being a frozen sea surrounded by land and the Antarctic being a frozen landmass surrounded by sea.  Whilst a rapid sea ice retreat has been recorded in the Arctic in recent decades, sea ice extent around some parts of the Antarctic have grown.  Understanding the similarities and differences between hemispheres has been the subject of intense study by the international polar research community.

“The current rapid retreat of sea ice in the Arctic Sea is of critical importance to Arctic ecosystems and global climate.  By uncovering, for the first time, a huge retreat around Antarctica we have established that sea ice in the Southern Hemisphere is also susceptible to major climate changes. This discovery will help us understand whether similar sea ice retreat events are likely in a future high-CO2 world.

“Although Arctic sea ice has diminished during the past 30 years, little change has been observed around Antarctica. This discovery in the ice core record of a massive loss of sea ice provides evidence that Antarctic sea ice can also undergo similar major reductions.  This may give vital clues to what might happen by the end of the next century.”

This research was funded through a NERC PhD studentship. The BAS team’s research on the last interglacial will be continued through NSFGEO-NERC project NE/P009271/1. 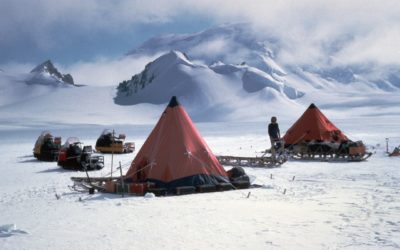