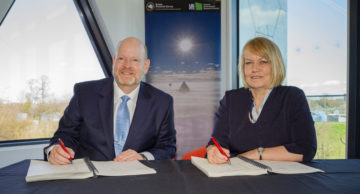 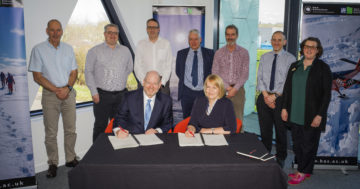 This significant procurement will make sure that the British Antarctic Survey continues to provide transport between South America or the Falkland Islands to its research station at Rothera, Antarctica. This is the main route for scientists and support staff, and cargo travelling to and from Antarctica.

The replacement aircraft will be extensively modified by the supplier, Field Aerospace, to suit the British Antarctic Survey’s need to operate in extreme environments. It is scheduled to be delivered by April 2024.

The Antarctic Infrastructure Modernisation Programme (AIMP) is transforming how the British Antarctic Survey conducts frontier science. Commissioned by the Natural Environment Research Council (NERC), which is part of UKRI, this long-term programme provides a world-leading capability to ensure that Britain remains at the forefront of climate, biodiversity, and ocean research in the Polar Regions.

The AIMP represents the largest Government investment in polar science infrastructure since the 1980s and has seen the commissioning of the new polar research ship, RRS Sir David Attenborough.

“The procurement of this replacement aircraft will ensure that the British Antarctic Survey can continue to provide air transport capability to Antarctica. The investment enables us to carry out world-leading scientific research in the Polar Regions.”

“We are both excited and proud to work with BAS again.” said Brian Love, Chief Commercial Officer, Field Aerospace. “Our experience and commitment to innovative solutions make Field Aerospace perfectly suited to aid British Antarctic Survey with this modernisation programme.”

More information on Future Air Capability and find out how the UK invests to modernise polar science – UKRI.