A new study has found that the world’s second-largest ice sheet is generating huge amounts of heat.

Researchers including BAS oceanographer Dr Keith Nicholls have observed extremely high rates of melting at the bottom of the Greenland Ice Sheet. The lubricating effect of this meltwater has a strong effect on the movement of glaciers and quantity of ice discharged into the ocean, but directly measuring it is a significant challenge.

Now, researchers have used a technique developed by BAS and used previously on floating ice sheets in Antarctica called phase-sensitive radio-echo sounding to measure and better understand melt rates of the Greenland ice sheet. The results are published this week in the journal Proceedings of the National Academy of Sciences.

As meltwater descends from the surface of the ice sheet to the base, energy is converted into heat in a process like the hydroelectric power generated by large dams. The effect of this meltwater descending is by far the largest heat source beneath the world’s second-largest ice sheet, leading to phenomenally high rates of melting at its base.

“This is the first time we’ve been able to measure the rate of melting at the base of the ice sheet, and it’s providing new insights into the way the ice sheet responds to increasing surface melting,” said BAS oceanographer and study author Dr Keith Nicholls.

As part of the EU-funded RESPONDER project, Professor Poul Christoffersen from Cambridge’s Scott Polar Research Institute has been studying meltwater lakes, how and why they drain so quickly, and the effect that they have on the overall behaviour of the ice sheet as global temperatures continue to rise.

“When studying basal melting of ice sheets and glaciers, we look at sources of heat like friction, geothermal energy, latent heat released where water freezes and heat losses into the ice above, but what we hadn’t really looked at was the heat generated by the draining meltwater itself. There’s an awful lot of gravitational energy stored in the water that forms on the surface and when it falls, the energy has to go somewhere” said Christoffersen.

“Given what we are witnessing at the high latitudes in terms of climate change, this form of hydropower could easily double or triple, and we’re still not even including these numbers when we estimate the ice sheet’s contribution to sea level rise,” said Christoffersen.

The study presents the first concrete evidence of an ice-sheet mass-loss mechanism, which is not yet included in projections of global sea level rise. 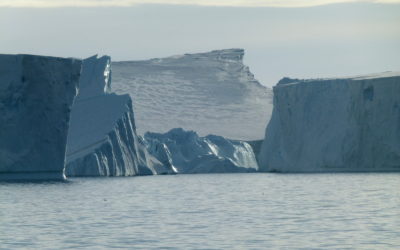