Halley VI: recognition for a unique and innovative research station

Halley is the world’s first re-locatable research facility. Designed by architect Hugh Broughton, engineered by AECOM, and constructed by Galliford Try, it is adapted to the challenges of living and working in the Polar Regions.

The science carried out at Halley provides vital information towards our understanding of ozone depletion, polar atmospheric chemistry, sea-level rise and climate change.

This week at the global Architizer A+ Awards, the unique research station won both the jury and popular vote for best Higher Education Institution and Research Facility, having been chosen by over 200 judges, 300 jury members and tens of thousands of votes from people across the world.

Slightly more unconventional recognition came from the book Brick Wonders, which showcases the Ancient, Old, Modern and Natural wonders of the world, built in LEGO; Halley features as a miniature LEGO model under the southern lights.

“When we came to the natural wonders, we wanted to include the northern lights, however I realised that by that point we had covered every continent except Antarctica! So, it seemed only right to include the southern lights instead.

“Once we’d decided on the southern lights, I wanted to include some smaller scale content to give the image some life. After listening to an interview on BBC Radio 4 about the design of the Halley VI station, it seemed only right to include this amazing piece of British architecture and engineering.

“The model itself is quite small — only around 25cm long in total, whereas the mosaic’d image of the aurora is over 2m wide. However, there are two LEGO parts which perfectly capture the shape of the end of each pod so it was actually a fairly easy build.

“The hardest part of the build was re-creating the shape of the white section of the central red pod. In the end though, two corner roof slopes gave me just the right shape.

“Just like the real building, each module separates for travel. I suspect though, that moving this model around will be the closest that I ever get to such amazing engineering!” 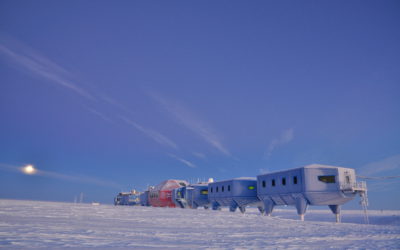