Recognised internationally for his research into the Earth’s past climate, Dr Mulvaney, has led British and collaborative deep-field missions to collect Antarctic ice cores from some of the most inaccessible regions on Earth.

Evidence from ice cores collected from Berkner Island in the Weddell Sea and James Ross Island on the Antarctic Peninsula reveals a record of climate and environmental change extending from centuries to tens of thousands years. His team’s investigations shed new light on how Antarctic ice sheets responded to past climate change and helps improves our understanding of what will happen in warmer world. Dr Mulvaney has visited Antarctica 15 times and was awarded the Polar Medal in 1999. On hearing of his award he said,

“This is a tremendous honour for me personally. I feel that it is also a recognition of the hard work of my colleagues from British Antarctic Survey who have been involved in this research over the years.” 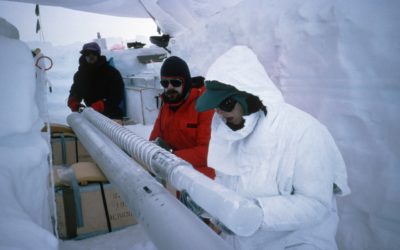