Staff at British Antarctic Survey (BAS) ships and research stations prepare to celebrate the festive season. It’s been a year like no other, with extraordinary arrangements made to keep facilities running and supply chains open during COVID-19 disruption. Work continues for many of our teams over the festive period, but there is time for some well-deserved rest and relaxation too.

In the UK the crew onboard RRS Sir David Attenborough will take a well-earned break from technical trials to celebrate Christmas. BAS staff usually based at the Cambridge headquarters will be having their work Christmas parties via Zoom. In the South, Signy Research Station has just been re-opened for the season by the team onboard RRS James Clark Ross and we look forward to bringing you news from the station in the New Year!

Rothera Research Station will be celebrating Christmas in 24 hour sunlight on the Antarctic Peninsula. Last year there were almost 140 people on station for Christmas, this year the hardy team of 27 Rothera winterers will celebrate together while the RRS James Clark Ross continues to make its way to Antarctica. The Rothera team will still be working hard over Christmas, but we hope they find time to resurrect the mince pie club (and that there are enough sprouts to go round on Christmas day!)

Read on to learn more about festive plans down South…

As is the case every year for Bird Island, Christmas day is a working day with fieldwork to be carried out.  Between radio tracking fur seals and checking for newly laid wandering albatross eggs the team all work together to make the day festive.  The station is decorated with a couple of Christmas trees, fairy lights, and plenty of tinsel and garlands.  Everyone chips in to cook a traditional turkey/nut roast dinner with all the trimmings, mulled wine and there’s even a homemade Christmas cake maturing in one of the food stores.

Throughout the day everyone has a time slot to call home and chat to friends and family and we usually get through a few festive films over the course of the day too.  Last year there were a few of us still awake on Christmas eve when the clock struck midnight so there was some late night opening of presents sent from loved ones back home.

This year the team at King Edward Point (KEP) are hoping for good weather as they’ll be celebrating Christmas with pizza from the build team’s pizza oven, or a beach barbeque. Christmas Day will also likely involve a sauna and a volleyball game between everyone on station, slightly different from a normal Christmas. The team will be opening presents from home though, with the post already delivered by the fisheries patrol vessel Pharos and sorted by Vicky in the Post Office.

A more traditional Christmas meal will be cooked by the team a few days earlier. They will also be decorating the whaler’s church at Grytviken, with mulled wine and mince pies on hand. Normally Christmas week sees plenty of cruise ships and hundreds of passengers visiting KEP, with staff from the base invited on board to meet passengers, so this year will be much quieter. However, it does mean that all of the teams based at KEP will have the day off to celebrate together.

The RRS James Clark Ross (JCR) crew, and new Rothera and Halley teams will be on board the JCR for Christmas day. We should be on route to Rothera or already in the vicinity as we are currently ahead of schedule, having dropped off the Bird Island and Signy teams.

The Christmas tree and decorations were put up on 1 December – the tree is still standing, although it has had to be reassembled on a few occasions.

Crew and station teams are partaking in ‘Secret Santa’ so there’s been lots of busy elves in the wood workshop and raiding of the stationery supplies to create wonderful gifts for one another (hopefully!)

Christmas day should be a relaxing day on board with lunch, movies, gift giving and enjoying our last couple of days together before the station teams depart the ship and leave the crew in peace! 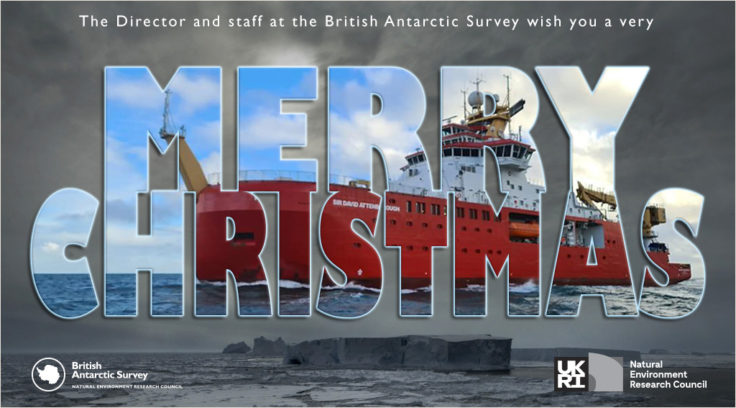 From all of us at British Antarctic Survey, Merry Christmas and a Happy New Year!