A series of unprecedented storms over the Southern Ocean likely caused the most dramatic decline in Antarctic sea ice seen to date, a new study finds.

Antarctic sea ice – frozen ocean water that rings the southernmost continent – has grown over the past few decades but declined sharply in late 2016. By March of 2017 – the end of the Southern Hemisphere’s summer – Antarctic sea ice had reached its lowest area since records began in 1978. The results are published this week in Geophysical Research Letters, a journal of the American Geophysical Union.

In the study, British Antarctic Survey (BAS) scientists puzzled by the sudden ice loss matched satellite images of Antarctica with weather data from the second half of 2016 to figure out what caused so much of the ice to melt. They found that a series of remarkable storms during September, October and November brought warm air and strong winds from the north that melted 75,000 square kilometers (30,000 square miles) of ice per day. That’s like losing a South Carolina-sized chunk of ice every 24 hours.

He continues: “The sea ice area is an important indicator of climate change, and sea ice loss in the Arctic has been linked to increased greenhouse gas emissions. But because sea ice records go back only four decades – when the satellite era began – it’s difficult to attribute Antarctica’s sea ice loss last year to human-caused climate change, Whaling records provide scientists with hints of Antarctica’s past sea ice extent, but it’s tough to compare that data to satellite records. There’s no indication this is anything but just natural variability. It highlights the fact that the climate of the Antarctic is incredibly variable.”

If greenhouse gas emissions continue to increase, scientists expect there to be stronger storms in the mid-latitudes, but can’t say for sure that the deep storms of late 2016 were due to human activity, Turner says.

Up until this most recent decline, the area of Antarctic sea ice had increased slightly since satellite records began in the late 1970s. But that increase doesn’t mean climate change hasn’t affected Antarctica, says Walt Meier, a sea ice scientist at NASA’s Goddard Space Flight Center in Greenbelt, Maryland, who was not connected to the study.

“This doesn’t mean that climate change isn’t happening, just that, at least through 2015 for Antarctic sea ice, the climate change signal could not be distinguished from natural variability,” he says.

More research is needed to determine exactly what caused Antarctic sea ice to grow over the past four decades amid a warming planet and if the low-ice conditions in 2016 and 2017 mark a turning point toward a decline in Antarctic sea ice because of climate change.

“The increase definitely does not refute global warming and may even be a feature of it,” he says. “As temperatures continue to rise, the warming effect will win out and we expect Antarctic sea ice to eventually start decreasing” Meier says.

“It is tempting to think that the 2016 low ice conditions may mark this turn toward decreasing ice, but that temptation is not warranted,” Meier added. “It’s too soon to tell whether the low ice conditions are an ephemeral downturn or the start of something more long-term.” 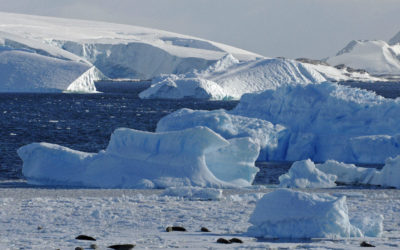