Glaciologist Dr Smith and his colleagues from the Universities of Edinburgh and Northumbria are camped out at one of the most remote places on Earth conducting a series of experiments on the ice.  He says,

“This is the first phase of what we think is an incredibly exciting project. We know the lake is 3.2km beneath the ice; long and thin and around 18 km2 in area.  First results from our experiments have shown the lake is 105m deep. This means Lake Ellsworth is a deep-water body and confirms the lake as an ideal site for future exploration missions to detect microbial life and recover climate records.

“If the survey work goes well, the next phase will be to build a probe, drill down into the lake and explore and sample the lake water. The UK could do this as soon as 2012/13.”

“We are particularly interested in Lake Ellsworth because it’s likely to have been isolated from the surface for hundreds of thousands of years.  Radar measurements made previously from aircraft surveys suggest that the lake is connected to others that could drain ice from the West Antarctic Ice sheet to the ocean and contribute to sea-level rise.”

“Around 150 lakes have been discovered beneath Antarctica’s vast ice sheet and so far little is known about them.   Getting into the lake is a huge technological challenge but the effort is worth it. These lakes are important for a number of reasons.  For example, because water acts as a lubricant to the ice above they may influence how the ice sheet flows. Their potential for unusual life forms could shed new light on evolution of life in harsh conditions; lake-floor sediments could yield vital clues to past climate.  They can also help us understand the extraterrestrial environment of Europa (one of the moons of Jupiter).”

Notes to Editors:
Still images and graphics are available from the BAS Press Office as above.

Since the 1970’s scientists have used radar, seismic and satellite technologies to discover over 150 lakes locked beneath Antarctica’s vast ice sheets.  The water beneath the ice remains liquid because of small levels of heat from the Earth’s core coming up through bedrock and from the insulating effect of several kilometres of ice above. The largest and most well known of these is Lake Vostok on East Antarctica. The lake is thought to be roughly the size of Lake Ontario.

British Antarctic Survey is a world leader in research into global issues in an Antarctic context. It is the UK’s national operator and is a component of the Natural Environment Research Council.  It has an annual budget of around £40 million, runs nine research programmes and operates five research stations, two Royal Research Ships and five aircraft in and around Antarctica.

* International Polar Year 2007–2008 is the largest coordinated international scientific effort for 50 years. From ice sheets and space science to Arctic communities and the creatures of the Southern Ocean, IPY includes more than 200 Arctic and Antarctic projects and harnesses the skills of 50,000 people – including scientists, students and support staff – from more than 60 nations. IPY is sponsored by the International Council for Science (ICSU) and The World Meteorological Organization (WMO).

The University of Edinburgh is a charitable body, registered in Scotland, with registration number SC005336. 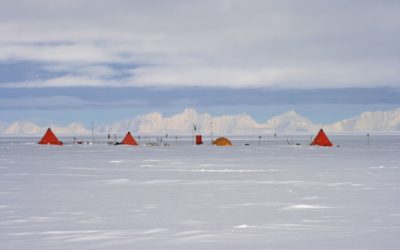