British Antarctic Survey’s Twin Otter aircraft takes to the skies over Barbados as part of a major international research campaign to enhance understanding of the behaviour of clouds and their role in climate change.

The five-week field study will shed light on how tropical clouds respond to global warming. The team, including scientists from the UK, Germany, France, and the United States, will measure the interactions between clouds, convection, atmospheric circulation and climate.  The project will change the way these cloud processes are represented in climate models.

The campaign is part of the EUREC4A project (Elucidating the Role of Clouds-Circulation Coupling in Climate) and involves more than 40 partner institutions, the deployment of five research aircraft, four research vessels, ground-based remote sensing and satellite remote sensing in the east and south of the Caribbean island of Barbados.

A science team will fly into clouds to make detailed measurements that will help them understand how shallow trade-wind clouds form and evolve.

The UK component of the project (EUREC4A-UK) is led by the National Centre for Atmospheric Science (NCAS) and the University of Leeds, with partners at British Antarctic Survey (BAS), University of Manchester and the Met Office and additional contributions from the University of East Anglia.

Trade-wind cumulus clouds play an important role in the Earth’s climate system. They can influence how heat is circulated in the atmosphere and they reflect sunlight away from the Earth’s surface. But the complexity of clouds – their makeup, behaviour and how they react to global warming – makes it difficult for them to be accurately represented in climate change models.

In fact, models disagree on whether these clouds will persist or disappear as Earth warms – if they disappear, Earth will become even warmer. These clouds are the single-most uncertain part of our current climate models.

“I’m delighted that we are using our polar expertise to participate in an international flying campaign in Barbados. It will help the wider science community understand the physics of clouds better, and ultimately lead to better climate models.”

To find out more about EUREC4A visit the website here 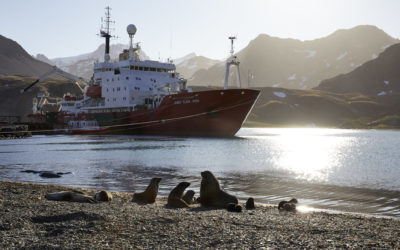