After 16 years of planning the countdown is on for one of the most ambitious scientific missions to Antarctica. In October a 12-man team of British scientists, engineers and support staff will make the 16,000 km journey from the UK to go deep into the heart of the frozen continent to collect samples of water and sediments from an ancient lake buried beneath three kilometers of ice. Their quest is to reveal vital secrets about the Earth’s past climate and discover life forms may that live in subglacial Lake Ellsworth on the West Antarctic Ice Sheet.

For the past three years a team of engineers from the British Antarctic Survey (BAS) and the National Oceanography Centre (NOC) have pushed the boundaries of polar technology to design and build a state-of-the-art titanium water-sampling probe and a bespoke sediment corer capable of being lowered down a three kilometer borehole in the ice made by a custom-built hot-water drill. To add to the challenge every piece of technology has to be sterilised to space industry standards to ensure this unexplored lake remains pristine.

After setting up the science camp and preparing all the equipment to start the mission, the team will have just 24 hours to sample the lake before the borehole re-freezes and re-seals the lake. Typical working conditions will be in temperatures a chilly minus 25°C and wind speeds averaging 25 knots.

The mission’s Programme Manager Chris Hill from BAS will be one of the first from the team on to the ice to prepare for the mission. He says:

“This time last year a small ‘advance party’ transported nearly 70 tonnes of equipment 16,000 km from the UK to the drilling site. Now, one year later, we will ship another 26 tonnes of equipment on to the continent so that we can complete stage two of this challenging field mission. We set foot on the ice again in October and hope to bring samples to the surface in December 2012 – an historic moment we have all been waiting for.”

Microbiologist Professor David Pearce from BAS is heading up the search for life in the lake water. He says:

“For years we have speculated that new forms of microbial life could have evolved in the unique habitats of Antarctica’s subglacial lakes. Finding life in a lake that could have been isolated from the rest of the biosphere for up to half a million years will reveal much about the potential origin of and constraints for life on Earth, and may provide clues to the evolution of life on other extraterrestrial environments. If we find nothing this will be even more significant because it will define limits at which life can no longer exist on the planet.”

The mission’s Principal Investigator Martin Siegert from the University of Bristol says:

“For the first time we are standing at the threshold of making new discoveries about a part of our planet that has never been explored in this way. Finding life in a lake that could have been isolated for up to half a million years is an exciting prospect, and the lake-bed sediments have the potential to paint a picture of the history of the West Antarctic Ice Sheet in a way that we haven’t seen before. The team’s mission is to get into the deep field and bring back clean, valid samples of lake water and lake-bed sediments, which can be brought back to the UK for in depth analysis.”

By December 2012 the team will have prepared the field camp and will begin the 100 hours of non-stop, hot-water drilling required to create the borehole through to Lake Ellsworth. They will then have 24 hours to deploy the water and sediment-sampling equipment. During this process the team will use a bespoke 1.5 MW boiler to melt ice to provide 90,000 litres of water for the hot-water drill. The drill will pressurise the water to 2,000 psi and then pump this water at 210 litres per minute through a 3.5km bespoke hose to create a 360mm wide borehole.

This research is at the frontier of exploration and has been made possible through the unique partnership created by two Natural Environment Research Council (NERC) Centres of Excellence, and eight UK universities. The Lake Ellsworth consortium programme is funded by NERC and draws together the UK’s top engineering, scientific and logistical capacities.

Find out more about the Subglacial Lake Ellsworth mission.

For more information you can contact the British Antarctic Survey Press Office:

Finding life in a lake that could have been isolated from the rest of the biosphere for up to half a million years will reveal the potential origin of and constraints for life on Earth, and may provide clues to the evolution of life on other extraterrestrial environments. If no life is found in the lake this could be even more significant because it will define limits at which life can no longer exist on the planet.

Secrets in the sediments

Analysis of the sediments from the sediment corer will reveal clues to microbial life and help scientists assess the present-day stability of the West Antarctic Ice Sheet and the likely consequences for future sea-level rise. Water and sediments samples will be analysed by consortium members in research institute and university laboratories throughout the UK.

The unique five-metre long water sampling probe was designed and built by engineers at the National Oceanography Centre in Southampton. Made of the highest grade of titanium to ensure maximum sterility and strength, it will collect 24 water samples at different lake depths. It will also capture the top layer of sediments at the lake-floor / water interface.

Scientists at British Antarctic Survey and Durham University, working in partnership with Austrian business UWITEC, have designed and built a sediment corer, which can extract a core up to three metres long. The unique percussion-driven piston corer is strong enough to penetrate even the most compacted glacial sediments to extract a core sample. 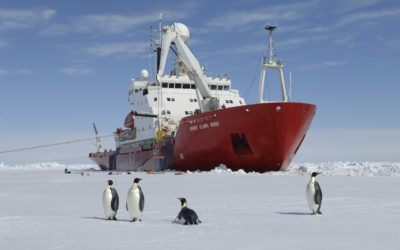