This month marks 75 years since the early beginnings of British Antarctic Survey (BAS), when a secret wartime expedition arrived in Antarctica and set up base.

Operation Tabarin – named after a Parisian nightclub reputed for its can-can dancers – set sail from the UK in December 1943, led by marine zoologist James Marr.

In February 1944, Marr’s 14-strong team arrived at Deception Island off the Antarctic Peninsula, and set up the first base. A few days later they moved on to Port Lockroy and set up the second base, close to the mainland, from where scientific sledging expeditions could take place.

This represented the first permanent UK scientific presence in the Antarctic; from these brave beginnings, BAS has grown into an organisation of more than 500 people delivering world-class polar science and operations, carrying out research of global importance into issues including climate change, sea level rise and biodiversity.

To mark this significant anniversary, over the next two weeks BAS’s archives team will make new Operation Tabarin material available online each day, including photos, films and reports recently inscribed onto the UNESCO Memory of the World UK Register. 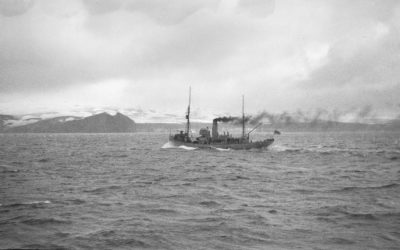