British Antarctic Survey (BAS) has achieved registration for the International Standard for Business Aircraft Operations (IS-BAO). Following a rigorous assessment by the International Business Aviation Council (IBAC) accreditation was given in recognition of its safe working practices and procedures when working in the Antarctic’s extreme environment*.

BAS’s operating environment is naturally more hazardous than the normal routine operations of a small corporate aviation unit. Iain Tulloch, Auditor at IBAC presented BAS with the registration certificate and congratulated the operations team for developing exceptional safety and environmental management systems when working in such challenging conditions,

“The success of this audit was based on the co-operation and transparency of the organisation, and I am extremely impressed with the mature and comprehensive practical implementation of the safety management system. Without a sound safety culture even the best systems do not work, but it is clear that at all levels of the organisation there is a strong commitment to safety when working in the Polar Regions.”

BAS Director, Professor Nicholas Owens, welcomed Mr Tulloch’s comments and highlighted the importance of aviation to achieving effective scientific research both in the Antarctic and the Arctic,

“The benefits of aviation to our work at BAS are countless; if we had to rely on surface transport alone, there is no doubt that the scientific research taking place in the Polar Regions would be less comprehensive. Aviation has and will continue to make an important contribution to vital scientific research in the Polar Regions, and I am delighted to receive this important registration under the International Business Aviation Council (IBAC).”

The organisation’s four de Havilland Twin Otters (DHC6 — 300 series) and the de Havilland Dash 7 (DHC7 — 110) are used in both logistical support and as science platforms. Joining the presentation were three BAS scientists who gave a valuable insight in to the importance of aircraft supported operations in their scientific fields. For example, the Dash 7 and one Twin Otter is used extensively for geophysical surveys. Another of the Twin Otters has sensors fitted on the nose and wings for studying cloud and weather conditions. Each of these survey aircraft also have custom fitted large format camera hatches for aerial photography and mapping purposes.

* The International Civil Aviation Organisation (ICAO) recently changed the way in which larger and more complex aircraft should be operated and governed throughout the world. This was reflected in changes to the Air Navigation (Overseas Territories) Order that was published in Jan 2008. This means that BAS works under a new category with different regulations governing Corporate Aviation. Air Safety Support International (ASSI) took the role of overseeing the aviation industry in UK Overseas Territories from the UK Civil Aviation Authority (UKCAA).

The British Antarctic Survey also has accreditations under ISO 14001, ISO 18001 and the International Safety Management Code for ships.

Stunning broadcast-quality footage and stills of aircraft in Antarctica, as well as location maps are available from the BAS Press Office as above. 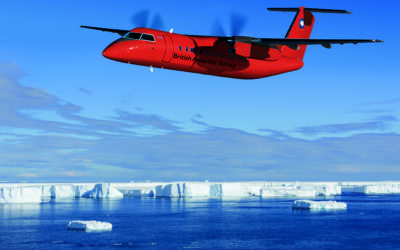