The retreat of Antarctic ice shelves is not new according to research published this week (24 Feb) in the journal Geology by scientists from Universities of Durham, Edinburgh and British Antarctic Survey (BAS).

A study of George VI Ice Shelf on the Antarctic Peninsula is the first to show that this currently ‘healthy’ ice shelf experienced an extensive retreat about 9500 years ago, more than anything seen in recent years. The retreat coincided with a shift in ocean currents that occurred after a long period of warmth. Whilst rising air temperatures are believed to be the primary cause of recent dramatic disintegration of ice shelves like Larsen B, the new study suggests that the ocean may play a more significant role in destroying them than previously thought.

The University of Durham’s, Dr Mike Bentley, one of the leaders of the project said,
‘We know that rising air temperatures can break up ice shelves but there has been a suspicion for some time that the role of the ocean may have been underestimated. This is some of the first evidence that a shift in ocean currents can actually destroy ice shelves. In this case it’s possible that a preceding warm period may have primed the ice shelf to disintegrate when the ocean currents shifted.’

The scientists analysed sediments from the bottom of a freshwater lake close to the edge of the present George VI Ice Shelf. The results revealed that about 9500 years ago the ice shelf retreated, allowing the sea to flood into the lake. The ice shelf didn’t reform until 1500 years later, and has been present ever since.

The findings are particularly relevant for other studies on the West Antarctic Ice Sheet where scientists have found that a relatively warm current, Circumpolar Deep Water, is causing high melt rates on the underside of an ice shelf in Pine Island Bay*. The gradual removal of this ice shelf may be causing the glaciers inland to flow faster, which could lead to enhanced drainage of part of the West Antarctic Ice Sheet, and a consequent rise in sea level.

Notes for editors:
Stills and video footage of Antarctica are available from the BAS Press Office.
The paper ‘Early Holocene retreat of the George VI Ice Shelf, Antarctic Peninsula’ is published this week (24 February 2005) in Geology.

George VI ice shelf lies south of the recently collapsed ice shelves along the Antarctic Peninsula. British Antarctic Survey scientists have monitored a very slow retreat of the ice shelf front since its discovery in the mid-20th century.

It is important to appreciate that ice shelf collapses have happened before. For example, BAS scientists Carol Pudsey and Jeff Evans reported that the Prince Gustav Ice Shelf, which collapsed in 1995, had also collapsed several thousand years ago. This new study is the first to show that a currently ‘healthy’ Antarctic Peninsula ice shelf has retreated in the past, and that the ocean may have been involved in the past retreat.

What this study shows us is that these are not random occurrences but that they are closely linked to changes in ocean circulation (George VI Ice Shelf) or periods of atmospheric warming (Prince Gustaf Channel Ice Shelf). These historical patterns mean that scientists can be increasingly confident that the present-day collapses of the Antarctic ice shelves are intimately connected to changes in our climate and our oceans.

In 2001 the Intergovernmental Panel on Climate Change (IPPC) predicted future sea level rise on the assumption that the Antarctic ice sheet would not make a significant contribution over the next one hundred years. Recent data from the Pine Island and Thwaites glaciers in Antarctica suggest that this area is making a contribution, but whether this is a short-term fluctuation, or a result of recent or ancient climate change, is an open question. Our ability to predict the future of this part of the West Antarctic ice sheet is limited and basic information such as the ice sheet thickness, conditions beneath the ice at bedrock, and past ice sheet history are required to build numerical models that will allow robust prediction.

The Department of Geography at the University of Durham undertakes research into environmental and sea level change in a variety of environments, including Antarctica and Greenland. The Department is one of the world’s leading Geography Departments and won the highest possible ratings for the quality of its research in the last three UK Research Assessment Exercises. More information on the Department can be found at www.dur.ac.uk/geography

The new School of GeoSciences at the University of Edinburgh is one of the largest multidisciplinary groupings of scientists carrying out research in the Earth System and the interactions with society. It has 160 academic/research staff and 250 research students. Further details can be found at www.geos.ed.ac.uk

Other institutions involved with this project include the NERC Isotope Laboratory at the British Geological Survey, Nottingham, and the NERC Radiocarbon Laboratory, East Kilbride.

Project leaders:
Dr Mike Bentley is a glacial geologist at the Department of Geography, University of Durham. He studies past changes in the Antarctic ice sheet, and how these might help better predict its future behaviour.
[email protected] 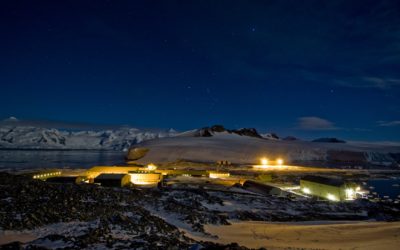