Friday (16 September) is International Day for the Preservation of the Ozone Layer. This year scientists at British Antarctic Survey (BAS) commemorate their discovery of the Antarctic ‘ozone hole’ 20 years ago and commend the historic international agreement (the Montreal Protocol 1987) that will lead to its eventual recovery.

Jonathan Shanklin, one of the researchers who made the discovery says,

“The 2005 hole is larger and deeper than the holes that formed when the discovery was made but the situation would be much worse if the Montreal Protocol had not come into force. This agreement shows us that global action by governments to stop the release of ozone depleting chemicals really can help society to successfully mitigate a global environmental problem. We are still experiencing large losses of Antarctic ozone each spring because CFCs and other chemicals live for a long time in our atmosphere. However, the ban ensures that we will see an improvement in the future. We now need to take similar actions to control greenhouse gasses, otherwise we will bequeath future generations a significantly different climate from that of today.”

Covering an area of around 22 million square kilometres this year’s hole is a little smaller than the record-breaking event in August 2003. Measurements made during August and September at BAS Halley and Rothera Research Stations reveal a 50% reduction on normal ozone levels over the base of the Antarctic Peninsula and the Weddell Sea, and a 20% reduction over the tip of South America and the Falkland Islands. The increased ultra violet light reaching the surface poses a medical hazard to people living under the ‘hole’ and without suitable protection people face the prospect of rapid sunburn and potentially more serious skin damage.

Members of the British Antarctic Survey’s Meteorological and Ozone Monitoring Unit (MOMU) carry out ozone observations at Halley and Rothera Research Stations. Ozone has been monitored at BAS research stations for nearly 50 years – the longest record of ozone measurements in the Antarctic. There was no ozone hole until the late 1970s. Joe Farman, Brian Gardiner and Jonathan Shanklin first announced the discovery of the annual depletion of ozone above the Antarctic in the journal Nature in May 1985. Later, NASA scientists re-analysed their satellite data and found that the whole of the Antarctic was affected.

The Montreal Protocol was originally signed in 1987 and substantially amended in 1990 and 1992. It stipulates that the production and consumption of compounds that deplete ozone in the stratosphere–chlorofluorocarbons (CFCs), halons, carbon tetrachloride, and methyl chloroform–are to be phased out by 2000 (2005 for methyl chloroform).

The Antarctic ozone hole is caused by chlorine and bromine in the atmosphere, which comes from CFCs and halons. The hole begins to form in the Antarctic winter, and reaches its largest extent every September, before disappearing again by mid summer. During the Antarctic winter, temperatures in the high atmosphere (the stratosphere), where most of the ozone is present, drop below -80°C and thin clouds form. Chemical reactions take place in the clouds and, when the sun returns in the spring, further reactions take place which destroy ozone. Typical ozone values for the Antarctic and the UK are around 300 Dobson Units, but this drops to around 100 Dobson Units at the maximum of the ozone hole. When the ozone layer is thinnest much more ultra violet light can reach the surface.

If all the ozone in a vertical column above the observer were brought down to sea-level it would form a layer just 3 millimetres thick. This corresponds to 300 Dobson units.

Chlorofluorocarbons (CFCs) were used in refrigeration and air conditioning systems, foam blowing for cavity wall insulation etc, in industrial solvents etc. Halons were used in fire extinguishing systems. The Montreal Protocol and its extensions control their release and their amount in the atmosphere is beginning to decrease.

British Antarctic Survey is a world leader in research into global issues in an Antarctic context. It is the UK’s national operator and is a component of the Natural Environment Research Council. It has an annual budget of around £40 million, runs eight research programmes and operates five research stations, two Royal Research Ships and five aircraft in and around Antarctica. 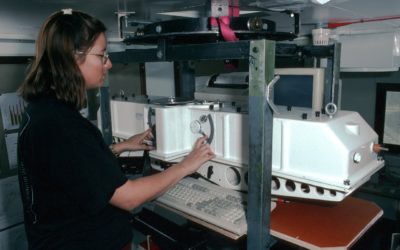