Oliver Ashford – a PhD student from Oxford University – is the youngest member of the SO-AntEco research cruise onboard the RRS James Clark Ross. He’s working with an international team of scientists from the Scientific Committee for Antarctic Research (SCAR) AntEco research programme.  Read on to discover how this new ‘buoy’ settles in to life on the ocean wave.

This being my first scientific cruise aboard a large research vessel, as well as being repeatedly chosen to model a selection of less than flattering safety equipment, I’ve also been tasked with gathering my thoughts to give you a window into what scientific life at sea is really like.

It is now becoming clear that undertaking research at sea has two main elements: 1. maintaining an adequate level of personal comfort and, 2. actually being able to effectively carry out the work that we’ve come here to do.

I’ll start with the personal comfort: to sum it up, surprisingly high. Sure, when I first boarded the ship I was wobbling all over the corridors like a drunkard, and my stomach felt pushed about a foot further towards my head than it should do, but now, as the icebergs drift slowly past outside, I seem to have found my sea legs. Then there’s the food; more than you could happily eat and of a relatively high quality all things considered. Cabins are all en-suite, and there’s even a lounge, bar and gym (which, perhaps, shouldn’t be used in that order). Half of the science team are currently trying to flip their body rhythms to start work on a night shift (7pm to 7am) as the ship runs 24 hours a day, but I’ve been lucky enough to avoid this – all the better for wildlife-spotting!

Moving on to the science, I’ve been impressed by the transformation of the ship’s main laboratory from what was essentially a room with sinks, a metal table and a few cupboards and drawers into an effective and fully-functioning workplace, with microscopes, aquaria, photography stations, and a plethora of well organised sorting and preservation equipment. The lab is also home to the so-called ‘wall of over-ambition’, which is plastered with a large number of different sampling and preservation protocols outlining how each of a great diversity of animals should be treated.

The first biological sampling occurred late last night, and was an exciting experience: a dozen or so scientists all dressed in their warmest clothes and bright orange safety gear waiting for the Agassiz trawl to surface as a light snow fell on deck – a white Christmas for marine biologists! Having worked only on long-dead specimens to date, actually seeing my study creatures (crustaceans) alive and kicking was rather novel for me.

After a day of seabed mapping today using high-resolution sonar equipment, biological sampling will commence again tomorrow at even greater depths. Who knows what creatures of the deep we’ll retrieve? I, for one, can’t wait to find out. 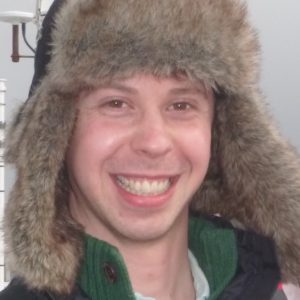 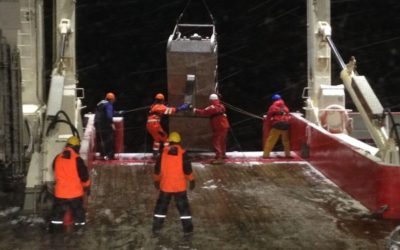 SHIP BLOG: Rhythm of the night 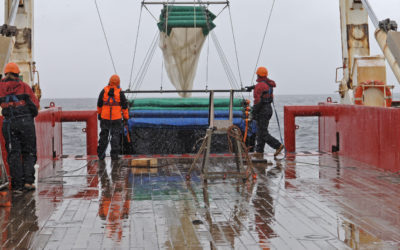 SHIP BLOG: Lost in a Sea of Biology