Norman Ratcliffe, a seabird ecologist at British Antarctic Survey, studies the biology of seabirds and how this is impacted by climate change. His latest research – Project LOMVIA – is part of the NERC Changing Arctic Ocean Programme. Read on to find out how Norman has been getting on with fieldwork in Iceland.

Project LOMVIA is based in the Arctic, which is a change from my usual work down south in Antarctica. Temperatures are warming rapidly in the Arctic which has impacts upon wildlife living there. One possible impact is species from further south moving north and competing with Arctic species for food or nest sites.

This project is examining these interactions for two species of guillemot – seabirds related to puffins – common guillemots, which can be found on cliffs all around Britain, and Brünnich’s guillemot, which are only found in the Arctic. The study is based at multiple sites in Iceland where the two species breed side by side but temperatures and sea conditions vary dramatically. Key questions we will address are will Brünnich’s guillemots retreat northward as temperatures warm and do they just go of their own accord or do common guillemots push them out?

I am currently in Iceland with my German co-investigator, Dr Thomas Larsen from the Max Planck Institute. We are visiting all the study sites to collect samples and plan the main field season in summer 2019. After a long drive from Reykjavik through spectacular scenery and a bumpy ferry ride we arrived on the tiny island of Grimsey – the only bit of Iceland that is within the Arctic Circle!

Here we met Lindi Þórarinsson and his team; our project partners from North Iceland Nature Research Centre. We spent two productive days on this beautiful island, Lindi skilfully catching both species of guillemot from ledges with a 12m long noose pole.

Roping up with climbing gear is essential when working on the edge of these tall cliffs. Lindi’s team were recovering data loggers that had recorded their migration routes during the winter. At the same time, we collected samples from the birds that will be analysed with molecular fingerprinting to look at how much their diets and habitat use overlap during the breeding season.

A gale struck as we returned to the mainland by ferry, making the journey even bumpier than before! We travelled to Latrabjarg along narrow, potholed dirt roads though howling gales and torrential rain. The journey felt like it was to the end of the World and indeed Latrabjarg is the most westerly point in Europe.

The cliffs here are immense and dwarf those on Grimsey, soaring vertically 400m above the stormy sea. The ropes were doubly welcome here! The weather in Iceland is really bad this year and our work was often interrupted by passing squalls, but after two days of cold, wet work we had collected all the samples we needed.

We will be back to work on guillemots at Langanes in the far northeast corner of Iceland later in the week before relocating to the South East to work on the small uninhabited island of Papey, where only common guillemots nest. We hope the successes of the first half of the trip will continue over the next ten days and will write more then. 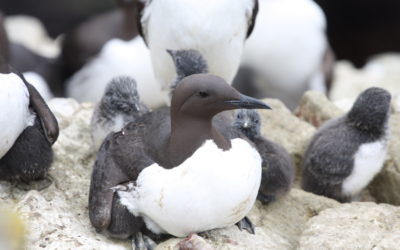