The End is Nigh!

In 12 days the first planes will arrive, invading us with who knows what? Well we have a pretty good idea. We are looking forward to welcoming some much loved friendly faces whom we know are coming back with fresh conversation, freshies (a.k.a. fruit and vegetables that have not had their juices dried out of them, undergone the process of frostbite or seen the inside of a tin can) and good old snail mail with postcards and presents from home. But we are not relishing the longer working hours, germs from the outside world to which we have been isolated or queuing for our dinner! It may seem petty but we have become used to strolling straight up to Chris’ (the Chef’s) counter of edible goodness twice a day at our leisure without standing in a line watching others feed themselves whilst our tummies rumble.

So what do 19 folk at Rothera get up to in the last 12 days of winter? As much as possible is the answer! Sabrina organized a film festival whereby everyone shared their wonderful attempts at being the next Steven Spielberg from a time-lapse of the stars to a movie about studying life under the sea and a winter photo competition, the prize of which is having your photo displayed on the wall in the lounge for years to come.

We then had a pirate fancy dress night, an Indian take-away themed dinner, a wonderful last Saturday night posh meal to celebrate and commemorate the end of winter and a big musical night with live music from the winter band and dance sets from budding DJs. And finally, there was Malcy’s birthday bash, for which we baked a gigantic cake and had t-shirt graffiti – this involved everyone wearing a plain white t-shirt which Sabrina had bought, some fabric felt tip pens and writing or drawing on each other funny things related to momentous moments during the winter. In amongst all of this we continued to do our daily work and primed this Antarctic base for the start of summer. This is no small feat; the runway needed to be cleared of snow for the planes to land, the Hangar doors and containers needed to be cleared of snow and ice so they could be opened and the vacant bedrooms and offices needed to have the windows dug out (for fire escapes) for the new personnel. This would not have been too bad if only the weather did not keep dispensing with all our hard work. Wind and snow made an inconvenient task one of mental and physical endurance as we woke up to see the areas that we had cleared filled in over night and we had to repeat the process all over again. Lastly everywhere needed a good Spring (quite literally) clean…. including the deepest darkest depths of the deep fat fryers — not all Antarctic activities are ones you want to remember!

So on Sunday 12th October the population of Rothera doubled as we welcomed the Dash (BAS plane) and 2 Baslers (U.S. Antarctic Programme).

It is predictable whom will be on the first BAS flight of the season as the base needs key personnel to effectively get the summer season, including the airport, fully up and running. Many of these personnel were familiar faces having only left us 7 months ago so it was a lovely evening catching up with them and sharing stories. But come Monday morning it was back to work and as no new members of the marine team had arrived yet at the Bonner laboratory it felt very much like nothing had changed. So off we went about our days work, it was a dive through the sea ice for me to collect another sample. My research project is investigating the marine species assemblages in the soft sediment around Rothera; how they are spatially distributed, are there any seasonal variations and how much do they contribute to the benthic ecosystem. Following a sample collection I extract, identify, weigh and calculate the carbon content of all the animals which can take several days depending on the biodiversity and abundance of animals within the sample. My record so far is 4022 individuals of 43 different species within 0.25m2!

As the end of the month approached we started to appreciate some other benefits of the start of the summer season. It is now bright daylight when we walk to New Bransfield House in a morning for breakfast and still light for a few hours after work enabling activities in the evenings again such as skiing, snowboarding, climbing or simply walking around the point wildlife watching. To the North the sea ice continues to fence us in providing a pupping ground for the adorable Weddel seals, whilst at the South the sea ice has cleared allowing us to get to one of our favourite dive sites; ‘Shacks Crack’, a wall teaming with life as it is sheltered from ice berg scouring. And there is now a considerable reduction in shovel calluses as diesel powered snow clearing and melting around the base increases. It is sad to see the ugly stone shards of the land where the crisp white snow used to be but a blessing to no longer have to dig out the drifted in snow from the front door of the laboratory everyday before work. So we end this month with about 60 people on base, there is a noticeable difference especially when on ‘gash’ — (cleaning and washing up duties) but the queues for dinner are not too bad… yet! 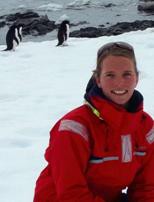