With the Ernest Shackleton long departed and the daylight disappearing rapidly, the 18-strong team remaining at Rothera really started to experience the proper Antarctic winter.

On the 18th of May we all assembled around the flag pole at the top of Rothera Point to witness the sun dropping below the horizon for the last time this season. The moment was marked by Dave Routledge, the oldest member of the team, who lowered the tattered Union Jack and presented it to Dale Sewell, the lucky winner of a draw held earlier that day. However, the sun had other ideas, and took advantage of the mountainous terrain around the base to peek down valleys and through cols for a few days afterwards. As the month went on and the sun eventually disappeared for good, we were presented with ever more spectacular sunrises and sunsets, with clouds lit up from underneath in shades of orange and purple light coming from below the horizon.

With daylight now in short supply it was time to start making other entertainment, namely by raiding the fancy-dress cupboard and have some proper theme evenings. First up came James Bond night, attended by smartly attired spies, beautiful Bond girls, villains aplenty and the obligatory fluffy white cat. Then, on day 42 of the winter, the team decided that they knew each other pretty well by now and went for a more risqué theme. Sadly all records and photographs of this night disappeared without trace following an unfortunate technical hitch.

Meanwhile, the annual BAS ‘Race across Antarctica’ had started, with Rothera managing to enter three teams into the challenge. Hours and days spent in the gym converted to kilometres raced across the continent, with some stiff competition coming from HQ and the other bases. Every evening the athletes pounded away on the treadmill, exercise bike or ergometer, with some sterling performances coming from unexpected quarters. With the competition running on into June, only time will tell whether victory is ours!

An Antarctic base doesn’t keep itself running, so plenty of hard work accompanied all of the play. Work continued down at the new Dutch Science Facility to install the ventilation systems to the new container laboratories, ready for the science to begin at the start of next summer. The music room also had to be moved over to the old library in Old Bransfield House, to allow the Field Assistants to spread their wings a little wider in Fuch’s House. The decoration of the new green room was an opportunity for the artistic members of the winter team to show off their talents, with the completed space giving a well-equipped, larger, and very tastefully decorated music practise area.

Winter trips continued throughout May, with a few members of base managing to skidoo down to Carvajal, the abandoned Chilean base on the southern tip of Adelaide Island. Some of the more foolhardy winterers opted to manhaul to Sighing Peak, a mountain at the northern tip of the peninsula. Despite hours of sweat and toil, eventually some dodgy weather prevented them from making it all the way.

One dark evening we had a long chat to the wintering team at San Martin (the Argentinean base about 40 miles south of Rothera) on the shortwave radio. Despite some minor issues with the language barrier, we discussed the weather, the football scores and the contents of their Doctor’s surgery. The two teams got along so well that they eventually invited us to a barbeque on an island halfway between the bases. We have yet to set a date…

It is amazing how quickly the time flies by. It is only a few weeks until the June midwinter celebrations begin, with the following weeks ticking down to the start of next summer. Fortunately, there is plenty of work and play to be getting on with, and the team are thoroughly enjoying the sense of isolation that living in the Antarctic winter brings. 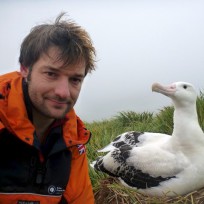