Since my last post, a lot has happened – we have arrived and begun work at Halley! The final week of our journey on the Shackelton saw the ship bash through the sea ice that surrounds the continent. Only half a metre thick to begin with, it slowly built up as we approached the Brunt ice shelf. Upwards of five metres thick closer to the coast, the ice actually halted our progress on several occasions and forced the captain to consider alternate routes through the ice, aided by a remote controlled drone that flew out up and ahead of us – they even use them down here!

Eventually we reached the ice shelf a week before Christmas. A few of us jumped out onto the ice to undertake the first task: mooring the ship. My first few steps on the ice felt like I was walking out onto a new planet! We dug holes about 1.5 metres deep for the sleepers (large wooden stakes) which are attached to the mooring lines in order to secure the ship to the shelf. The local Adelie penguins came to inspect our work, slowly waddling up to each mooring hole and spending a couple of minutes examining what we’d done, before waddling off to the next hole. I think they approved! The next week was the ship relief: non-stop 24 hour work done in 12 hour shifts to unload all of the ship’s cargo bound for base. I was assigned the role of tally man on the night shift and Alex was the same but on days. Our job was to log every single piece of cargo that left the ship. Everything and anything from cherry pickers, fuel drums, steel and timber to new office chairs, drinks dispensers and scientific equipment.

Relief carried on for eight straight days with Christmas put on hold until the job was done. Our final shift ended at 8am on the 27 December and we were told our transport to Halley would be arriving at 4pm that afternoon. Exhausted and trying to adjust back into a day routine, we climbed aboard the snow cat and began our journey to Halley through the fog. Three hours later the only thing to signify that we had arrived on base was our driver and station operations leader, John Eager, radioing the comms team for the ski-way status: “no known traffic!” came the reply and onwards to the base we went. Slowly through the fog appeared the blue and red of the iconic modules. We had arrived! Given our exhaustion we were given a swift introduction to the base and then shown to our summer accommodation, away from the main modules and named the Drewry.

The next morning greeted us with blue skies and sunshine as the Halley VI research station revealed itself to us. It’s incredible! Flat white, all around, for as far as the eye can see. To the South, you can see Antarctica proper, where the floating ice shelf we sit on meets the continent at a place called the “Hinge Zone”: a huge rise of ice filled with crevasses created by the ice sheet tumbling off the continent into the Weddell Sea.

The base is surrounded by a 5km perimeter that makes an ideal running/skiing track and within this, in addition to the main modules, are a variety of standalone modules, known as “cabooses” that either house scientific experiments or are used in the maintenance of the base. To the north there’s the base garage where the mechanic’s keep all of the vehicles running in pristine condition: Piston bullies, John Deeres, Norwell Cranes and Bulldozers, all of which are laid out on the raised vehicle line, arranged in neat rows like a child might’ve done with their toy diggers from their toy box; the arrangement is not for aesthetic purposes though – it’s the best arrangement to avoid large snow tails and the eventual burial of the vehicles from the 1.5 meters of snow accumulation the base gets every year. South of the Drewry, there is the waste processing sledge where as much of the base waste is sorted and recycled. To the South of this, just before the main modules there is the WASP: the workshop and stores platform. Inside the main modules it is luxury. A sizeable dinner area backed by a kitchen any chef would be happy to work in. Next to the dining area, there’s the bar, complete with darts board, pool and fuseball table, all backed by huge windows which look out onto the ice where you can admire (or laugh at) people trying their hand at kite skiing. Upstairs, you have the choice of the projector room and the 900 GB of film and TV to laze around in or, if you’re feeling more active, there is the impressively stocked gym, complete with its own sound system and TV.

After being cooped on the ship for nearly 3 weeks we finally met some fresh faces, mainly the outgoing winterers and some of the base technical support who arrived much earlier in the summer season. Despite the fact that the whole purpose of the Halley VI research station is to carry out scientific research, scientists are actually in the minority down here. The majority of people are tasked with arguably the more important job of keeping the base operational and safe: generator mechanics, electricians, plumbers and so on. If one our scientific instruments goes down we don’t collect data for a day or two, but if a generator goes down or the plumbing system fails everybody on base is at risk. It easy to forget how exposed we are on this little remote base.

So what is my science about and what am I trying to achieve down here? Well, I study the global carbon cycle in order to try and understand how it is being affected by human influence and how it may respond in the future. What a lot of people perhaps don’t realise about the carbon dioxide emissions that human activities release to the atmosphere, is that just over half of the CO2 remains there and contributes to global warming and climate change. The other half gets absorbed by the Earth’s carbon sinks: There’s the land carbon sink – plants, trees, soil – anything green that photosynthesises. The terrestrial biosphere, to give it a collective name, uses carbon dioxide do derive energy for life and in doing so releasing a by-product – oxygen. CO2 also dissolves into the ocean, especially in colder waters, where it can then be utilised by marine organisms that also photosynthesise – microscopic phytoplankton that form the base of all food chains in the ocean. Marine organisms incorporate carbon into their shells too. When these organisms die, they sink to the bottom of the ocean where the carbon is then stored for hundreds of years, we call this the ocean carbon sink. The exact magnitude of each sink varies from year to year due to the inter-annual variability of the carbon cycle which itself will likely be influenced by climate change. If we are to reliably predict future climatic changes, mitigate and adapt to them, it is essential that we characterise and monitor the efficiency of both the terrestrial and ocean carbon sinks’ ability to withdraw anthropogenic CO2 from the atmosphere and further reduce the uncertainty in our understanding of how these sinks will respond to future climatic changes.

The Southern Ocean that surrounds Antarctica is a particularly important oceanic region for CO2 exchange with the atmosphere, accounting for approximately 40% of the total global ocean carbon sink. The Southern Ocean has long been recognised as a major influence on the global climate, playing a key role in controlling the atmospheric CO2 concentration through glacial and interglacial cycles. It is unique in terms of its geography, compared to other ocean basins, in that the absence of a land barrier in the vicinity of the Drakes Passage (56-65˚S) allows a circumpolar current to exist (known as the Antarctic Circumpolar Current (ACC). The unimpeded flow of the ACC connects all of the Earth’s major ocean basins and completes the global ocean overturning circulation that is responsible for the storage and transfer of heat, freshwater, nutrients and carbon around the globe.

The Southern Ocean’s ability to absorb carbon is determined by two opposing biogeochemical processes: Firstly, the unique ocean circulation pattern around Antarctica results in an upwelling of deep water from the depths of the Atlantic Ocean. This deep water was last in contact with the atmosphere in the northern most reaches of the Atlantic around the coasts of Iceland and Greenland. Up there, the remnants of the warm salty gulf stream become cold and therefore more dense than the surrounding water, allowing it to sink to depth, bringing with it carbon dioxide that dissolved into it at the surface. From then on, that water travels south along the ocean floor, over the equator and into the Southern Ocean. Along its way, dead marine organisms rain down on it from the surface. As the organic matter (technical term for anything that used to be alive…) falls through the water column it gets degraded and respired by bacteria. In a way, this process is a form of recycling: all of the original compounds that that particular organism needed to live its life get regenerated: CO2 and nutrients, such as nitrate and phosphate. Consequently these compounds get concentrated in the deep waters. This decomposition of the organic matter also consumes O2 and so the very deepest waters of the ocean are O2 depleted. The net result is that the deep water of the Atlantic become enriched in CO2 and nutrients, and depleted in O2. When this water upwells along the Antarctic coast it comes in contact with the atmosphere again where CO2 and O2 can then exchange with the atmosphere. O2 goes from atmosphere to ocean, because those waters lack O2, whereas CO2 goes from ocean to atmosphere because those waters have a higher concentration of CO2.

So that’s the first process, which adds “natural” carbon to the atmosphere. The second process is driven by the upwelling of the high concentration of nutrients that marine organisms require to grow. In the summer months in the Southern Ocean, sunlight stimulates phytoplankton blooms or “new” biological production that are driven by all of the excess nutrient brought up. The phytoplankton draw CO2 out of the water in order to photosynthesise and as a result concentrate O2 in the surface waters. Now the opposite is true from before: anthropogenic CO2 goes from the atmosphere into the ocean and O2 goes from ocean to atmosphere. Just north of ACC, these waters that hosted all of this productivity subduct into the interior of the ocean, again as part of the global circulation pattern. As a result, the anthropogenic carbon gets locked away in the ocean interior.

So, it is these two processes which determine how strong the sink is – the amount of upwelling of old, natural CO2 to the atmosphere and the amount of productivity that sucks up new anthropogenic CO2 from the atmosphere. This is what I’m attempting to monitor with my atmospheric O2 measurement system, I’m able to detect those tiny emissions to the atmosphere from the phytoplankton and also the sinks of O2 rushing into the upwelling waters around the coast. 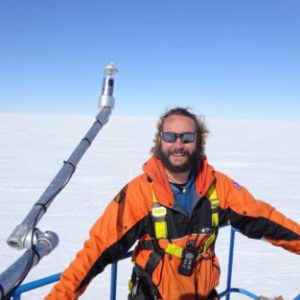