For the residents of KEP, September is the calm before the storm… the last month with just the wintering team on base before the start of the new season. October will see the return of our lovely builders and the arrival of many new faces including museum staff, a film crew and experts in laser mapping and asbestos management. It will also herald the start of the tourist season with yachts and cruise ships visiting Grytviken, but for this month at least we can enjoy the remaining peace and relative solitude of our little community. That isn’t to say that it has been a particularly quiet month as we are always kept busy with both work and fun…

As the resident fisheries biologist, my month started with a trip on Pharos, our fisheries patrol vessel, to undertake the regular plankton sampling programme. Every six weeks or so I carry out trawls in Cumberland Bay and the Bay of Isles (about 40 miles northwest of KEP) to monitor larval fish assemblages and the presence of krill and other beasties in the coastal waters. While we were out to the north of the island the fisheries officer carried out an at-sea boarding on one of the krill vessels fishing next to a rather large iceberg. Random inspections are carried out throughout the fishing season to check that vessels are complying with a range of procedures and protocols to ensure the sustainability of the fishery.

I returned to base on what is locally known as a Dingle Day… when the weather is absolutely perfect and you see the island at its absolute best. The guys on base had made use of the glorious conditions to carry out their own boating trip to inspect the various emergency huts that are located on the coast around the local area. On the Barff Peninsula the Corral Bay and Sorling huts were checked and resupplied, and then it was over to Cumberland West Bay to do the same for the huts at Harpon and Carlitta. The appearance of a leopard seal proved a slight distraction to the task in hand, but rounded off a perfect day for all concerned.

With no sign of the winter snow thawing Rod, our base commander and mountain expert, took some of us out for ice axe arrest training. We have very generous local travel limits, but as we are our own search and rescue team it is vital that we are sensible and well prepared for any trips off base. Despite being a little nervous of impaling myself, it wasn’t long before Rod had taught us how to safely stop ourselves sliding down the hillsides using an ice axe as a brake, a useful skill to have on the mountainous areas that we explore on weekends.

The snow brings out the big kid in all of us, so on a cold and clear Sunday afternoon a few of us decided to build a snowman… although somehow as the building progressed it changed into making a snow-woman. We had located our sculpture in a prime position in front of the webcam and over the following days we received many emails praising our rather curvaceous snow lady! A rather nice time-lapse video shows our artistic endeavours:

With snow drifts over 7 foot deep the following weekend saw a number of sledges being unearthed from the store room and we had a wonderful afternoon spent sliding down hills. GO Jo and I then sat back in the sunshine watching the boys challenge each other for the bragging rights of surviving the highest starting point.

September saw a number of celebrations and theme nights on base. Early in the month a cryptic instruction for everyone to assemble in the bar at 7pm on Saturday night with their passports in suitable attired for summer holidays resulted in a mildly bemused assembly of people wondering what on earth was going on! Boarding passes were issued to all staff who were then escorted onto a ‘KEP Airways’ flight… otherwise known as the pitroom corridor which had been converted into an airline cabin with rows of seating, tray tables, in-flight magazines and bags of complimentary peanuts! After the safety briefing (complete with floor lighting to guide passengers to the nearest exits) stewardess service delivered meals in metal trays with plastic cutlery and the novel evening with a holiday atmosphere ensured a fun time was had by all.

With many South American crew working on our fisheries patrol vessel, in the middle of the month KEP staff were invited aboard to celebrate Chilean Independence Day. We enjoyed a delicious BBQ in the cargo hold, followed by a rousing rendition of the Chilean national anthem. After dinner Stuey presided over a range of mess games, all of which all seemed to be designed to make you look rather ridiculous while at the same time stretching muscles you didn’t know you had! One of the highlights was the Team KEP vs. Pharos Crew tug of war, played while sitting on the floor using a broom handle instead of a rope. Sadly, despite a valiant effort (and some cheating!) by Rod and his team, the Pharos boys were victorious, but I suspect there will be a rematch in the near future.

Government Officer Pat and Base Commander Rod both celebrated birthdays this month. Pat’s wife Sarah cooked a delicious dinner for everyone at Carse House for his special day, and a couple of weeks later we conjured up an “Arabian Night” for Rod. The evening could probably be best described as “multicultural” — Screen 2 was converted into a Bedouin tent where we enjoyed a candlelit Moroccan feast under canvas, with a somewhat eclectic range of fancy dress on display!

A much anticipated event in the September calendar was the annual Falkland Islands Craft Fair. After all the effort put into making our Midwinter presents (see the June web diary), they were carefully packaged up and sent to Stanley to see if we could bring home any prizes for South Georgia. Gathered round a laptop in the kitchen, we watched the results of each category gradually get uploaded onto Facebook throughout the evening, and there was much celebration when KEP entries won 1 first prize, 5 second prizes and 2 third prizes, plus 5 Highly Commended certificates.

While our human visitors aren’t due to arrive until next month, the wildlife is already making a very welcome return to our shores. With a good number of pregnant female elephant seals starting to haul out on the local beaches, “pup watch” began in earnest as we all kept a careful eye out for the arrival of the first pup. Hazel and Ella were the lucky ones who found the first little guy (or maybe girl) on the beach by Susa Point while out walking. It wasn’t too much longer before we had a handful of pups outside Discovery House on base, and the Beachmaster in charge of the harem will soon be extending “the flipper of love” and fending off the attentions of other males as fight scenes worthy of Frozen Planet will undoubtedly begin outside our windows next month.

Time flies when you work hard and play harder, and the winter has come to an end all too quickly…

With much love as always to friends and family back home, 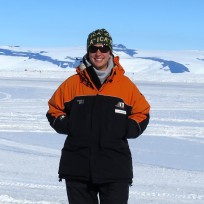