BAS cruise JR 275 departed the Falkland Islands on the James Clark Ross in early February and will sample the South Scotia Ridge, southern South Sandwich Islands and Weddell Sea before returning to Stanley in late March. This Antarctic research cruise is running three scientific programs: a biological program collecting animal samples and video footage, a geophysical program including seafloor mapping and collection of rock samples, and an oceanographic program using CTDs and gliders.

It has been a surprisingly busy first week for all aboard the James Clark Ross. From the excitement of the first wildlife sightings of whales, dolphins, penguins and albatross as we left the Falkland Islands, to the less-joyous attempts to gain our sea legs as we crossed Drake Passage, the EvolHist (biology) team have been busy adjusting to life and work onboard a moving ship.

On Thursday as we moved into the calmer waters of the Scotia Sea our resident geologist Phil was able to deploy his first ‘rock dredge’ near some seafloor volcanoes. The dredge is a simple but useful tool. Rocks are dislodged by the sharp frame around the first net as it is dragged along the sea floor. This is followed by the effective ‘back up’ of a metal cylinder with a solid base, which can also collect rock (and sediment samples) if the first net is not successful.

On our second dredge for the day – success! There was a buzz on deck as Phil realized we’d struck what he was after – magnesium-rich rocks called ‘peridotite’. These particular peridotite rocks have been carried by lava all the way from the earth’s mantle, a phenomenon not known from any other place on the major spreading ridges of the ocean floor. These amazing little rocks are still being studied by Phil and his colleagues and have only been collected from this site once before.

On Friday night a lucky few braved the cold night air to glimpse their first iceberg from ‘Monkey Island’ at the top of the ship. My first sighting was just after 5.30 am the following day as we neared the South Orkney Islands. It was a beautiful sight to see these huge bright white plateaus bobbing by, and a sure sign that we’d moved into true Antarctic waters.
The marine geology team had been busy ‘swathing’ our path, bouncing sound waves off the ocean floor to create a ‘virtual map’ of its depth and make-up, and allowing us to choose a suitable site for deployment of our scientific trawl equipment.

We started our test sampling with the Agassiz trawl (AGT), a sturdy piece of collecting equipment, made up of a metal frame and thick net, and less likely to be damaged if we happen to find ourselves in a rocky area.

A two minute trawl yielding many of the animal groups we had hoped to see including sea spiders, sponges, brittle stars and many other creatures, even my own favourite sea cucumbers! With only small rocks brought up with the catch it was then safe to deploy the more sensitive epibenthic sledge (EBS) while we sorted through the first catch.

The epibenthic sledge uses two nets to collect animals from the ocean floor, and this particular sledge has also been fitted with camera equipment, allowing us to glimpse the animals in their environment. Being able to link the preserved animals back to this footage later will help build a more complete picture of abundance, habitat, and interaction between animals. Deploying the equipment requires skill, a good harness, and a little bravery as the trawl is lowered over the back deck.

Tonight we’re heading towards some volcanic calderas near the South Sandwich Islands. With a little luck we’ll miss the worst of the coming storm and will be able to start our next deployments early tomorrow. But for now, as the ship has started rolling again, I think it would be wise for me to sign-off and grab a hand rail before I get too dizzy! 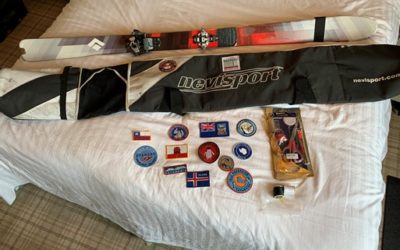 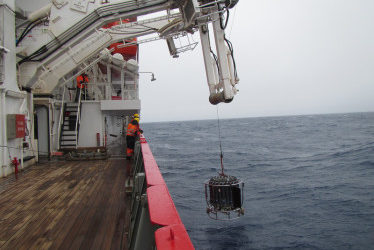