Over the past year, our EDI interns have spent time at BAS working on a variety of fascinating polar projects. Here, we hear about how they’ve built their skills and experience to put to good use in their future careers.

Having an open mind opens doors

Many of the cohort felt that whilst they had always looked at BAS as what Charlotte Green calls “a shining research institute”, they didn’t know what to expect and have been challenged to develop new areas of expertise. Of her new coding and lab skills, neither of which were her speciality, Charlotte adds that the experience has “instilled confidence in me that I can do this and just needed the opportunity”.

Tylei Reeves-Francois agrees that you can build confidence by tackling a challenge head on. She explains that her project on the complex interaction between the wind and ice has involved experts agreeing with her which has been a nice boost. “Presenting a seminar on my project has also been an opportunity to break that nervousness”, she adds.

“Being based at BAS has given me the opportunity to learn a lot of techniques on the go” says Ben Graves, who has been collecting data about clouds in Antarctica from instruments in Cambridge and Rothera. He adds that his experience on the programme has equipped him well in his recent PhD interviews.

Khadidja Hamze, working on a project testing the effects of different temperatures on marine bacteria, encourages anyone thinking of setting out on a career in research to “try out everything and go for as many things as you can.”  She affirms that the unknown can reap huge benefits and says “what brought me here was taking a chance, and it showed me I am capable of doing this.”

The importance of adaptability when planning your career is noted by Lucy Stephenson, who has been assessing thousands of samples of elephant shaped molluscs. They say “don’t feel your path into your eventual long-term career will be linear, it’s not a straight trajectory. Take whatever opportunities come your way”.

The importance of networking in science

Whether online or in person, there was no doubt in the minds of our cohort that the chance to rub shoulders with a wide variety of experts in the field has led to many stimulating conversations and long-term relationships.

Emilia Dobb, who was working on a digitization project across eleven stations explains the value of being at the heart of scientific discussions. “I’ve met some really great people and scientists, all of whom I’ve learnt a lot from but who have also been very friendly and welcoming. You get a real sense of the importance of collaboration for a higher purpose”. Emilia has recently accepted a job offer as a research analyst and believes the skills and knowledge she’s acquired on the programme have been invaluable.

Many of the interns acknowledged the limitations the pandemic has placed on their ability to share ideas in person. Those who have been able to work on site in Cambridge have appreciated the face-to-face contact they’ve had.

Madeline Anderson admits “Lots of scientific interactions weren’t available during the pandemic. But going into the canteen with science people I know on Twitter has really helped with networking.” Mads has been looking at the effects of methane seeps on seabed animals during  the project at BAS.

If at first you don’t succeed…

We did ask our interns what words of advice they had for anyone starting out in science or research. Several talked about the importance of not being disheartened by failure, or by a project not going to plan.

Encouraging early career researchers “to be kind to yourself and allow yourself to make mistakes” is Tylei’s tip, who also reassures that “you’re not going to be an expert straightaway.”

The way to maintain determination and curiosity is summed up nicely by Mads who says “If someone tells you no, then that’s not the end. Rephrase your question, don’t get discouraged at the first no.”

Ben counsels applying patience. “It’s really good to take a while to decide what you’re really interested in. Have proper think about what you’re doing and try different things.”

Lucy agrees, adding “A career in science takes a long time. Make the most of every stage that you’re at and the people that you’re surrounded by. Reach out to them, people love it when you’re enthusiastic, show it.”

Wise words from our interns and advice which could be applied to science, research and life in general. We’ve loved having them and wish them all the very best for their future lives and careers. 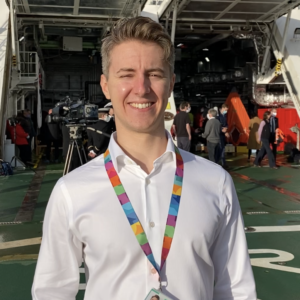