This is my first visit to Antarctica. Being here is an adventure. Getting here was an epic journey.

At 23.30pm on 11 November we left Cape Town on board a Russian Ilyushin cargo plane with around 80 other passengers, all crammed in with the cargo. It was a tight fit. Changing into our polar clothing an hour before we landed was a challenge that became a comedy. We arrived at Novo after 5 hours flying and I climbed down the ladder and stepped gingerly onto the blue ice runway into temperatures of around −13°C. Coming from summer in Cape Town and the very well heated plane, this did take my breath away a little bit.

Due to poor weather conditions at Halley the Russian base at Novo was home for a day or two. We were immediately made welcome, and despite there being far more of us than had been expected all in one go, beds were found for everyone. The scenery was incredible, both unusual and spectacular at the same time. If I close my eyes I can still see the huge glacier looming over the base, an ever present and never breaking wave of ice, and the shattered rock landscape surrounding us, all bounded by sea ice. When we left after two days of weather uncertainty I was lucky enough to get a ride in a specially built Toyota Hi Lux, a big wheeled car that bounced, slid and skated across the glacier as we drove back to the airhead. I’m doing things I wouldn’t dream of back in the UK.

Our next flight was on a Basler, a small twin engined propeller plane that seats eighteen people plus baggage. After three hours in the air we were told that the weather had deteriorated at Halley and we had to divert to Sanae, the South African base. By this time I was in dire need of “facilities”, a luxury the Basler did not have. It did, however, have a bucket…

After two more hours of flying we reached Sanae. But there was a problem. The cloud base was very low and the pilot couldn’t see the runway. Cue tense minutes of flying around looking for a clear stretch of ice with no crevasses in it… scary but exhilarating at the same time, like riding a roller coaster at a dodgy fair. When we did land we had to taxi for over a kilometre to reach the runway, a very bumpy ride, and were met by a line of guys on skidoos who gave us a generous welcome as we clambered off the plane.

“Welcome to the REAL Antarctica, guys.”

A note of thanks here to the Canadian pilots and crew of the Basler.

We stayed at Sanae for one night and took off for Halley the next day. While it was good to be on our way, I was still sad to leave the base behind; the hospitality was excellent and it had a great library and a huge TV (cinema) room. Every time I see Inception I shall think of Sunday morning on the sofa there.

We reached Halley on a Sunday evening, just in time for dinner. My job here is to support the Base Commander, in fact it’s a pretty similar job to the one I do back in Cambridge — almost. I have rotas to put together, I create and modify spreadsheets, I make sure everyone pays for things they buy and ensure refreshments are stocked up. When new people arrive I have to make sure that the Tally sheets are up to date in all the buildings, this takes me around forty five minutes as I trudge my way around the station; the extra time is mostly the dressing and undressing bit at each building. If it is a windy day I have to be careful my clipboard doesn’t turn into a sail and drag me sideways, truly an exercise in Extreme Admin. In a few weeks time the ship will arrive for Relief, then my workload will really take off. I have to tally up the boxes and crates as they arrive on the cargo line, then make sure the information is uploaded.

Some of my first jobs have been the best — three days after I arrived two buildings, the Garage and the Drewry, were moved from their winter to their summer positions. This would normally have been done before we got here as we were the third group to fly in, but the weather set everything back. The Garage and the Drewry have been semi buried over the winter and sit in deep troughs with high mounds of snow behind them and long ‘wind tails’ stretching out beyond them. They cannot be left like this as a) the holes they sit in are dangerous to people and vehicles in the vicinity and b) they will eventually be buried in the snow if they are not moved. So, bulldozers are hitched up to them and, pulling and pushing from behind, the buildings are dragged ponderously from their holes.

I was outside for the Drewry move – it was like watching a giant caravan being towed. For the Garage move I was given a hard hat and a job inside. My mission: to stop stuff falling over and flying around. A lot more fun than spreadsheets, and an interesting sensation as the huge building jerked free of the ice.

Both buildings are now up and running, thanks to the hard work of everyone on the base.

Shortly after the buildings were moved the Melt tank had to be emptied for cleaning. All the water on base is obtained from shovelling snow into the melt tank. Everyone takes part in this duty, even a total shovel novice like me. It sure beats going to the gym for exercise value, especially when you shovel like I do — I spent my time worrying I was going to chuck the shovel down into the tank with the snow by mistake.

While a longer shower has its attractions the metal cubicles are not designed to linger in and the shower curtain has a habit of lovingly trying to smother you while you rinse. There is only so long I can spend in a metal shower cubicle with a homicidal shower curtain — although I did my bit, I shampooed my hair twice rather than once.

Halley showers and cooler weather are not the only things I have had to get used to since my arrival. My room is comfortable but only about the size of a largish wardrobe and I share it with another girl. Being untidy is not an option. The food is so fantastic I have to go out for perimeter walks whenever I can to keep my weight down! There is 24 hour daylight and for the first few days this fooled me into forgetting it was the middle of the night. The sun is very strong in Antarctica, and the ozone layer is extremely thin. Even if you are not facing the sun the reflective quality of the snow scatters the UV at you wherever you are. No one goes outside without high factor sun cream, lip salve and sunglasses. It seems strange to apply sun cream and then pull on my heavy boots, padded boiler suit, furry mad bomber hat and gloves. Everyone here has the distinctive Halley sun tan, just the face with white panda eyes where sunglasses have been.

Being in Antarctica is an amazing experience and I am storing up every moment to take away with me when I leave. I am learning that what I think is windy is just a breeze, what feels cold in England is almost T shirt weather here and, on a clear day I can see almost forever. 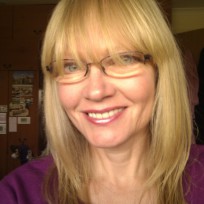