Welcome to the May 2010 winter diary. My name’s Tim and I am the wintering vehicle operator mechanic at Halley. So what happened in May then?

Well May started in true Antarctic tradition by the lowering of a rather wind-torn and weary-looking Union Jack. This signifies the last time the sun will rise above the horizon for the next 100 days. Unfortunately the clouds covered the sky and with a chilly breeze in the air, making it impossible to tell whether the sun had actually set or not. This saved Richard (student) our resident met babe the embarrassment of getting the date and time wrong. This is always a topic of hot debate!! The lowering of the flag is traditionally done by the by the oldest person on base. This year the task fell to Mark our winter plumber, being the old man of the team at a rare old age of 100. Up climbed Mark on to the roof of the Laws battling true Antarctic weather to lower the flag for the 2010 winter. The flag is then raffled off to one lucky winterer to keep as a memento of their time south.

We celebrated that night by having a BBQ, complete with some brilliant food cooked by our back up chef, who is also our winter BC Mister Patrick Power. Due to the fact our regular chef (Ant Dubber) was on night watch. On night watch everyone of the wintering team has to do their turn at doing weather observations through the night and keeping check on the generators and heating systems and, most importantly of all, making sure the building doesn’t catch fire.

The BBQ was brilliant as usual and, as always, completed with slush puppy beers, and if you were really lucky frozen beer. It is possibly the only BBQ you will go to where you have to put your beer bottle on the BBQ to warm it up!!

The 1st of May also signified the start of “Race across Antarctica”. Six of us have challenged ourselves with the task of completing 12000 km. This represents a journey across Antarctica and back again. We will do this by rowing, walking, running, biking and even skiing, down here at Halley the most southern British base.

All the vehicles down here, of which we have quite a few, now have to be de-iced, winterised and placed on storage mounds to prevent them from getting too buried in the winter months. Jack has been busy down the garage doing this. The last one was finished on the 5th of May and then placed on a mound for storage until the spring when it will be dug out and returned to the Garage for another de-ice before it can start its summer work. The last machine onto a mound was K14; this is one of the Steel tracked Sno-Cat which is mainly used on the sea ice at relief time. This is also the oldest machine on base but is still going strong.

May started where April had ended. More “Blows” and snow, lots and lots of snow. This is turning in to a bit of a pest for me, having to keep containers, sledges and doorways clear of snow. This has also meant that we have had our warmest temperature in a while, a tropical −1.8°C. This was reached on the 3rd of May during one of our many blows so far. The temperature tends to rise when we have a blow but this was “banana belt” warm!!(Banana belt — term used for Rothera). We have also had our coldest day to date. A blisteringly cold −47°C, which I can assure you is extremely cold. You can take a jug of boiling water outside and throw it in to the air and it will freeze instantly into a snowy mist. When the temperature drops below −40°C it also works very well at styling your hair.

May continued on with the usual pattern of “Gash” which comes round every 10 days or so. This is when we all take it in turns to clean the main building, wash up after meals and keep an eye on the radio and tag board. The tag board lets us know where everyone is when they leave the main building, the Laws. This is in case of any emergency; you always know where everyone is at any time. Work carried on as normal through May despite the “Blows” and cold temperatures. The sledge line was raised once again, which seems to be turning in to a monthly job due to the rather large amount of snow accumulation so far this winter. Anything that is left on the surface here at Halley has to be constantly raised back onto the surface. This is due to the constant accumulation of snow. If it is not raised it just gets buries and gets lost?

Ed, our resident field assistant and holiday guide, decided it was time he dried out some tents. These had been used in the summer and over the previous winter and Ed had to give them a good check over, repairing any damage. This meant Ed had to take over the garage for a week, so he seized the opportunity whilst it was empty and Jack was on nights. In true Field assistant style he did it by filling the garage with Pyramid tents and bits of rope and various other GA “clatch”.

Whilst down here in Antarctica we have to rely on each other in case of any incident. Every month we have breathing apparatus training with Craig, our Sparky. He makes us get fully kitted up with all the fire proof clothing and breathing cylinders, making sure we can carry out all our checks to ensure the cylinders are holding pressure and oxygen. Craig and Pat surprise us every so often by springing little scenarios to keep us sharp! They set the fire alarm off at some ridiculous time in the morning and set up false fires in the building. This month Craig had apparently collapsed in the generator room where generator set number 1 was on fire, so two people had to don breathing apparatus to go and rescue the fake dummy, Craig. We also have a doc school every week so that if a medical emergency should occur, we might be of more use to the doctor. This also helps in case the doctor’s off base and we have to cope until he returns.

Whilst we are mainly down here to look after the base through the winter months, it is not all work and no play. May has seen the usual birthdays, Saturday night meals and quizzes, of which Mike seems to be the regular winner. First of the birthdays was Ian’s which we celebrated with a very nice steak tea, cooked up by resident chef Ant and a birthday cake in the shape of a car taking part in a hill climb. This was closely followed by a few beers and a good evening was had by all.

The next Birthday was mine!! I choose to have “cave men” themed evening due to the fact most of us look like we belong in prehistoric times, with all are big beards. I think Mat is winning at the moment especially with the greyest beard. Once everyone had assembled in various states of dress and hairiness we sat down to are evening meal of beef, lamb, duck and just about every other type of meat going and was eaten in true cavemen style. The main meal was closely followed up by another creation by the doc in the shape of a dozer. Everyone had a great time and it is one birthday I will remember for a long time.

Well Midwinter is fast approaching and everyone around base is busy making their Midwinter presents for each other. It also means we are approaching the half way point of this amazing experience but at least we get a week of next month but I will leave that for next month’s diary. Just like to say hello to all my friends and family and a special hello to Laura missing you all. 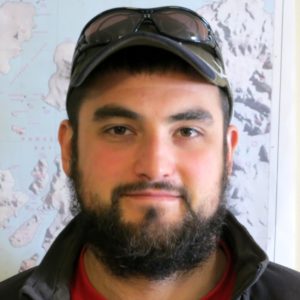