This is a particularly special month for all of us down here at Halley. It marks the middle of our year and sees the start of our week-long celebration of Midwinter.

There are many traditions to be upheld on Midwinter’s day. One of those is the task of making someone in the team a Midwinter present and keeping it a secret until the day! On the very first evening way back in February when we all sat down together after the departure of the Ernest Shackleton, we each took it in turn to draw a name out of a hat to see who we would be making our present for. So, there it began, we had three and a half months to start designing, planning and making our presents. Of course some people would make a ‘sensible’ early start to their present making; others (you know who you are!!) would leave it until the beginning of June and possibly even later to make a start!!!

Robbie didn’t really quite know what had hit him or his workshop as everyday for a good few weeks people bounded in with various bits of wood and proceeded to chop, saw, plane, sand and generally create an awful lot of mess! It was worth it though as the results were amazing; 11 stunning presents were turned out and received by 11 very happy people.

Another tradition of Midwinter’s day is to brave the elements of the outdoors and perform a mad dash around the Laws platform wearing just a pair of shoes and a hat… crazy… yes!! Temperature wise it wasn’t too cold, not −50°C which is the other time this tradition has to be repeated but −18°C, quite warm really but with the 20 knot wind that was blowing and the −34°C subjective temperature it certainly made it hard work!

The day continued with the annual viewing of the horror movie ‘The Thing’ which gave us just enough time to digest our breakfast prepared for us in the morning by Agnieszka and build up an appetite for the feast that John had been preparing since 6am the previous day.

John looks after us all incredibly well and Midwinter’s day was to be no exception. After weeks of planning which began back in December on our journey down on the ship, John produced an exceptional 11 course meal. This kept us at the table from 4pm to around 11pm with just a break in between for the opening of Midwinter presents and listening to the BBC World Service Radio Broadcast.

Champagne and Smoked Salmon CanapésWild Mushroom Risotto dressed with Truffle oil and topped with Parmesan crispsFrench onion soup with Gruyere croutons and Baby rollsSatay marinated Crocodile steak on a bed of ginger and sesame stir fry vegetables.Gin and Lemon and Lime and Tonic sorbetsLobster and Monkfish tails dressed with butter sauce and lemon wedges.Duo of Fillets: Fillet of Beef and Lamb with butternut squash and a Port infused Demi Glace sauce, served with fresh carrots, cauliflower & broccoli in cheese sauce and gratin potatoesAssiette of Raspberries: Raspberry Crème Brûlée, Raspberry Sorbet and Raspberry Bakewell puddingA selection of the finest frozen Cheese accompanied by vintage PortFresh ground Coffee served with home-made Petits foursCigars and liquors on the VerandaAt 9.30pm we all huddled into my office to listen to the 2009 BBC World Service radio programme which is put on each year for all of the BAS Antarctic bases.

The programme is broadcast over HF radio from a transmitter in Dorset in the UK. In the old days HF radio was the only way that people in the Antarctic were able to listen to radio and communicate with the other bases, aircraft and ships. We still use HF radio for all of our aircraft and field party communications but we also have a satellite link which provides us with a permanent internet connection and link to the systems back in Cambridge. The broadcast was a bit crackly in places but seemed to know when the Halley section came on as the reception cleared up and we heard messages left for us from our families and friends.

A month or so before the broadcast we had been sent an email from BAS HQ asking us for a song that we would like to be played and a celebrity/presenter that we would like to say a few words to us. After much careful consideration and tough competition from the likes of ‘Ice Ice Baby’ by Vanilla Ice a clear winner and favourite emerged which swept all other options aside… ‘Superman’ by Black Lace a song that everyone on base was introduced to back in March at the birthday of Ben our Genny Mech and since seems to have been adopted as our base song!

We also gave careful consideration to which presenter/celebrity we would like to read out a message to us. There was no guarantee that the person we chose would a) be available and b) agree to do it, we would only find out during the broadcast. We were all incredibly pleased when we heard the distinctive voice of Sir Ranulph Fiennes’s blasting out over the airwaves calling us ‘heroes’.

After this it was back to the table to finish off eating, drinking and relaxing. A wonderful day, thanks to everyone here for making it so special.

With Midwinter’s day falling on the first Sunday of our week off, a rota was drawn up to split up the various base duties that need to be carried out each day, including melt tank, gash, cooking and nights. This meant that everyone was able to have most of the week off and be able to take part in the various activities that were organised.

Wednesday was Robbie’s cook day and he treated us to one of his specialities; the frozen BBQ. He’s become a dab hand at making homemade sausages and burgers and BBQ’ing in excess of −40°C and we’re all becoming experts at eating and drinking as quickly as possible before food and drink quickly becomes frozen once again!

Thursday saw the annual Halley Crazy Golf competition tee off. Each person was tasked with making a golf hole in their workspace. John made up the score cards, people donned various garments of golfing attire, or not, as the case may be… and off we all went, stick in hand ready to tackle the Halley Crazy Golf course. Susanna showed everyone how it was done (by cheating!) and stormed ahead to victory…

No week off would be complete without a trip to the local karaoke bar so after we’d all worn ourselves out trekking around our 9 hole golf course we headed in to the bar. Rob and I kicked off the proceedings with a little duet of ‘Don’t go breaking my heart’ and that set the scene for the rest of the evening, it could only get better!!!! John and Ben did a disturbingly accurate version of Take That’s ‘Back for good’ with barely either of them having to check the words, quite worrying! Niv’s version of ‘The Time Warp’ got everyone up off their stools and dancing. Much fun and hilarity was had by all, even Colin who was on nights that evening and who had spent the best part of the evening with his fingers in his ears gave us a rendition of ‘Boom Boom Boom Boom’!

On Friday Niv, myself, Susanna and John headed out into the cold, dark afternoon to practise some winter skills. Niv showed us how to cut steps, manage steep traversing, build anchors and belay without harnesses for short steep ascents. It was great fun and the skills will definitely come into use when we go on our next set of winter trips.

Since our winter started we have all been taking part in the winter 2009 Pool League organised by John. We have a few pool sharks down here so we were not too surprised to find Nick, John, Giles and Robbie in the final four. The semi-finals were played early during the week; the big showdown between Giles and John saw John clinch the victory and Nick maintained his unbeaten record and beat Robbie to make his way to the final. So Sunday evening, at the end of our week off, we watched the final play out between Nick and John. The best of 9 frames… it was very, very close indeed, with John taking the first 3 frames it was looking like all was going in his favour but in true Nick style he made a comeback and took the next 4 frames. This time it was John’s turn to make a comeback and he did so taking the 8th frame and bringing the game back to 4 frames all so on it went into a tense final 9th frame which eventually saw Nick emerge as the 2009 Halley Pool League Champion and winner of a fab trophy made by Robbie, Colin and John.

Our week of Midwinter celebration was topped off by us seeing our first aurora of the season in the early hours of the Monday morning after Midwinter. From around 2am – 3am we all stood outside and gazed upwards as the sky changed shape and moved, the Milky Way stood out spectacularly and we saw shooting stars bursting across the skies, really very special. Luckily out of the 8 or so cameras that were out there we managed to get 2 good pictures courtesy of Colin!!!

As well as all the fun and festivity of Midwinter’s week we also carried on with all our usual jobs that are done to keep the base running and to keep the science work that Giles does going.

Robbie surprised us all with a fire drill scenario where he had (well, a dummy version of) fallen unconscious in his room and as it turned out climbed into his wardrobe in an attempt to escape. It was a great way to test for real the use of all the BA kit and to put into practice everything Robbie has been teaching us over the last few months.

Susanna has been running Doc School for us each week which is a great opportunity to learn all sorts of interesting and useful new skills. One of the sessions this month was to learn how to put in an intravenous drip and insert fluids into the arm. Susanna bravely donated her arms and ended up with four drips in her arms at one time!!!

Comms wise life quietens down considerably during winter. It’s a time to start going through equipment, testing, repairing and getting everything ready for the busy summer season that we have ahead of us. One of my monthly jobs is to check and re-tension the stays on my HF masts. With the accumulation of snow that we have here, a lot of pressure builds up on the stays so they have to be loosened each month to keep them at the correct tension. I also had a broken antenna element to fix that had come free from its anchor during the previous month. There’s always something to keep you busy!

Nick and Colin were busy down at the garage stripping and servicing skidoos and giving them a new lick of paint ready for the on-coming summer season. The garage was also given a spring clean and became the location of choice for our Midwinter photo which would be sent to all Antarctic bases and friends and colleagues wishing them a happy Midwinter.

So, June has been a busy and enjoyable time for all on base and we now see ourselves heading in to the second part of our year. The light is starting to come back, when the sky is clear we can see the horizon and the sky glows blue and red and pink, it’s incredibly beautiful and we’re incredibly lucky to be here to experience it.

Much love to everyone back home. 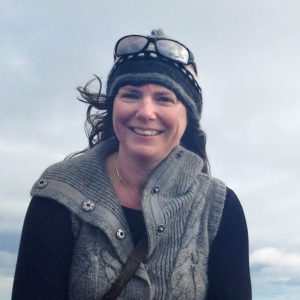