As the pandemonium of midwinter subsides the reality of Antarctic winter grips us firmly by the throat, a deep red floods the afternoon sky allowing a hint of blue to invade the blackness of perpetual darkness allowing the smallest morsel of light to spill back into our lives, this is a rare chance to stand in the doorway of the garage and bask in the glow of the returning light. This is accompanied by a cold snap that reaches −50 deg C closely followed by a blow that peaks at 45 knots, not bad for the first week of July!

The weather was a notable feature of this month and we were subject to several large blows that deposited snow liberally around base. On occasion they were strong enough to prevent outdoor activity but our suffering was eventually rewarded with our second aurora of the winter which lasted right through until morning.

The 4th of July saw an evening of American culture with members of our team dressing as popular American personalities. After the meal, consisting of homemade hamburgers and thick cut chips, followed by toffee apples and doughnuts, there was fairground style games such as, whack the rat, lucky dip, and Hoop-La.

The 18th of July saw the celebration of Giles Finch’s birthday, to mark the occasion a cake was made by the good Doctor bearing the mark of his favourite football team, Manchester United, this seemed to cause Giles some distress as his chosen team is in fact, Liverpool FC. There was also a “winners enclosure at Newmarket” theme to the night’s proceedings and bets taken on the races. Six races were shown on the big screen and the person with the most money at the end was deemed to be the winner. Giles himself compered the evenings entertainment, reading out the winners and handling the bets, yours truly had a particularly bad financial run as everything I bet on either ran the wrong way or was shot in the paddock! Ben Mapston seemed to be doing best and there was some controversy as there was a chance that he might have actually attended the recorded races being shown. Giles Finch is believed to be 102 years old.

Mid July has us practising for the Antarctic film competition, the theme is a Laws walk through to the music of Tony Christie’s “Is this the way to Amarillo”. Chef plays the lead as the man walking the length of the Laws with all the team playing small parts in each of the rooms. Filmed by Robbie and directed by Giles, this celluloid masterpiece has lead to considerable mental problems in Robbie as editing and his continual quest for perfection meant listening to the soundtrack close to a hundred times. He is now a shell of the man he used to be and is reduced to a quivering wreck intent on burning Amarillo to the ground.

A photography competition was a close run contest amongst our team to see who could get their picture used as the official image of Halley. This winning photograph would be used for the Halley station corporate gift. Second and third place were snatched up by Colin and the Doc, respectively, with first place going to our glorious leader Agnieszka.

The garage has been a busy place this month especially after the time off during midwinter. A mountain of skidoos to get through as well as seal issues with the bulldozers. A turbo failure on Alvin, generator set 1, lead to a cylinder head reconditioning to be carried out by Ben. Such was the demand for labour that an apprentice was taken on. Our faithful Doctor finally got her hands on the tool she’s been hankering for since she arrived, the valve lapping stick! With a new valve and re-cut seat, Alvin’s cooking on avtur once more.

Diary thrown together by: 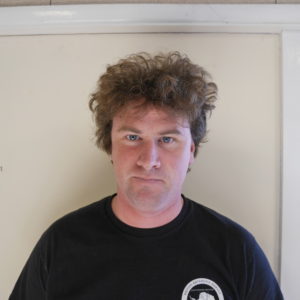