Some months in the Antarctic calendar are slightly less exciting than others for various reasons but still have enough originality to be enjoyed, more so by the fresh and innocent winterers than those who have already weathered the unrelenting storms for a year and who look happily ahead to lazy days on sandy beaches drinking pinicolade and peach snapps.

This final dark month of July hasn’t troubled us too much with general base problems although there have been a few incidents of snowdrifts due to the winds pushing snow into various annoying places around the base and covering up skidoos.

The quickly paced outdoor runs that started in earnest with Richard, Thomas, Anthony, Sune and Dave around midwinter have faltered to a steady jog and a steady halt, I hasten to add. These activities may be curtailed by the shortness of the day, but they are not prevented. Maybe it’s the excellent cooking that is weighing on their minds or their bellies.

The handlines, which are used as a guide to moving from area to area in low visibility, are often raised. Here Pete (base commander) is deciding the next best course of action to raise the lines. There are over 2 km of handlines used on the base so this can take some time although lifting the handlines only needs to be done maybe twice a year but is dependant on the conditions and most people help out whenever needed. The idea of getting out into the fresh clean air to do some manual labour rather than be cooped in the Laws building is often a good incentive.

The blizzards here can be fairly sudden, turning the weather from a cold crisp darkness to a dark blinding snow fury within an hour, and when working a kilometre away, a close eye has to keep on the weather. Under these circumstances everyone on base is required to check in at regular intervals, and be equipped for weather changes. Daily runs to the CASlab (my place of peace, work and worship) involve carrying a survival bag, torch, food, and extra clothes. This makes the journey harder but essential should the weather change.

The meteorological team of Tamsin, Kirsty and Dave recorded the weather for the month and the results displayed on a board.

The weather is always a talking point at Halley and so the monthly weather statistics provide a valuable source of information. Although the amount of snowfall this year is slightly less than those of previous years the weather here can be a bit unpredictable and so the next few months may hold a few surprises in store for the base.

There has been only one observable aurora this month. It was as spectacular as ever and probably one of largest seen so far this year covering most of the sky. It lasted for only a brief hour or so compared to the May spectacle that lasted for many hours and provided many tired eyes the next morning. This one could well be the last one we will see again in this part of the southern hemisphere for most of us.

There has also been an attempt at a paper homemade balloon launch by Alex Gough (our resident data manager). It didn’t quite reach the dizzy heights expected but it did make it a few metres into the air glowing as it disintegrated. A second version is in the planning and hopefully will provide greater heights and much more entertainment. There is often time at Halley to try things that would never be achieved or likely to occur at home.

The king of old (Mark in his especially made to fit suit), who’s 40+ birthday it was meets the up and coming high street king, Dave ‘burger king’ Evans. A cool looking chap with a definitive mullet, the next generation.

Then there was the Halley Z band (Dean, Dave, Alex and Mark) once again performing to the crowd but with an Elvis theme, pulling out of the old great song lists such as love me tender, are you lonesome tonight and suspicious minds to name a few. The crowd of 8 was rocking and the single girl was screaming for more. They rocked and rolled until the room was empty.

There was also another birthday (Andy, the generator mechanic). Andy can be seen in his Elvis haircut but although some would say he looked the part we never did find out if he could sing the part. Richard (doc) made a special cake for each person’s birthday on base, this time for Andy it was in the shape of a primus stove. These are highly fuelled sugar provisions for the hard tasks on base that lay ahead during our stay here. They also help to the doc/dentist to practise teeth removal (joking)!!! Fillings only.

The melt tank (our water supply) still had to be filled each day in all weather conditions to provide a source of clean fresh water. The filling of the tank can take anywhere between 5 and 30 minutes depending on the usage of water the previous day and the conditions of the snow. The loss of many shovels and other things down the hole has occurred by almost everyone on base and retrieved by Brain (plumber) that same day. The dozer comes in once a week to help loosen the snow and build a mound to make the task of shovelling the snow into the tank a little easier.

From the photo we can see that the sun has now started to show itself a little by breaking up the darkness and giving us a glimpse of what is to come in the future. We all look forward to the bright days but secretly knowing that we will also miss the moon and stars that guided us from our place of work to the comfort of the laws building.

What else has happened in the month of July?

The designing of t-shirts got underway and over 100 t-shirts were ordered.

The base carried on with weekly lessons in German (Thomas) but also introduced have been French (Tamsin) and Spanish (Richard and Tamsin) classes so now everyone on base will be multi-lingual by the time we leave, Wednesday movies, Thursday samba, a poker card night, and of course Saturday night.

The month of July has slowly moved along, stuck in between midwinter and the sun’s return. Now towards the end of the month with the sun expecting to rise early next month the base is once again starting to increase its activity. The forthcoming months will be the busiest at the base, due to the science and the building work that has to be achieved for the incoming people this summer.

Some people assert that shortening day length lead to psychological and social crisis. Others, that the period following midwinter poses greatest difficulty, as people face the fact that there is still the other half of the year to get through, with the early excitement of being in Antarctica beginning to wane. I dare say as a group we will be fine, and the friendship and strength that held the group together at the start is stronger than ever. It is an interesting time all the same for us here at Halley.

The science for me this year is mainly involved with the year-round atmospheric chemistry measurements of key oxidants (OH, HO2, NO, O3, CO, Js), to quantify variables (eg. light intensity, wavelength, chemical precursors) that determine photochemical emissions from snow. This together with the ozone depletion events add to an exciting and very full year.

A big hello to all that know me, or those that are not so sure due to the long hair and facial hair growth. 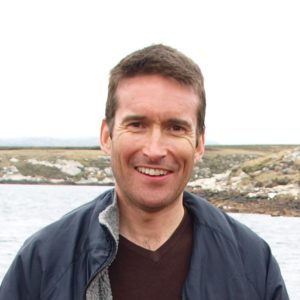