As I write this, I can see and hear most of the research station contingent heading outside. The reason for this is that the sun will set for the first time in a number of months tonight. After perpetual daylight, everyone here would really like to watch our 24 hour summer companion disappear. Even if he will return above the horizon 30 minutes later!

I have lived at Halley Research Station for a month and a half now; the time has well and truly flown by.

The first week was a whirlwind; not only was I settling into a new home and job, but there was an incredible logistical operation to support. Everyone became cargo handlers regardless of their day job and there was always an ever-present ‘man-chain’ unloading supplies of food or equipment.

Once the ship had left us, bound for the Falkland Islands to take on fuel, station life settled down and the season’s work of maintenance and post-winter repairs began.

Halley is in the remarkable yet tricky situation of only being reachable by sea for 2 to 3 months of the year. Once the height of summer has passed, air temperatures drop and the sea begins to freeze over for winter – effectively closing Halley to all but specially designed aircraft that are fitted with skis as landing gear. This incredibly short season means a very high work tempo and work ethic to match is vital for anyone living and working here.

I have mentioned the summer season only being a small number of months long, but after this busy period only 13 people, known as ‘winterers’ will remain on station for the 8 months of winter – of which 3 months are in total darkness.

The 13 ‘winterers’ (of whom I am one!), spent a long weekend living in tents 25km from the research station this past month. The aim being to teach us all the skills we will need over the next year; although its beauty knows no bounds, Antarctica hides danger in all directions. As well as starting to build up key field craft skills, the weekend also served as a brilliant team building weekend for the 13 relative strangers that would be the only company for each other over the long Antarctic winter.

We had all met for a few weeks before deployment, but now we were together away from the hustle and bustle of our daily routines at Halley station, the group truly began to bond.

The British Antarctic Survey has a fleet of 5 ‘polar’ aircraft, of which 4 are fitted with skis and capable of visiting Halley station. Two of these aircraft, DHC-6 Twin Otters, were temporarily based at Halley to support a science project in the Theron Mountains. The British Antarctic Survey operates on a single pilot procedure, meaning that anyone on station can get the opportunity to sit ‘up front’ on a flight. I was one of those lucky people and visited a field team based in the Theron Mountains on a geology project.

At this time, the ship will sail away with all station personnel except the 13 ‘winterers’ on the 5th of March – I can’t wait for the adventure to begin! 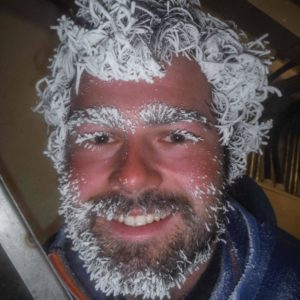