February was a really busy month at Halley.

The month has started with the arrival of Summer Science Staff on the RRS Ernest Shackleton – this was the second Shack’s call to Halley.

We immediately kicked into overdrive on the Science front, with a load of experiments commissioned, upgraded, fixed, tidied-up and expanded on all fronts of Science. As this is the first full season after Halley VI Build Season finished, a lot of the experiments are being brought back to life.

My role as Data Manager is to support all scientists and engineers who are looking after their experiments, on the Data Management side, so all that frantic activity meant a lot of software development for me. As each instrument is deployed, it needs to be connected to what we call a Logger or Acquisition PC, which in turn collects and stores the measured data. This data then needs to be processed (e.g. to store it in a common file format, which we can then use for further analysis), visualisation plots need to be generated, the experiment needs to be added to the monitoring platform (which sends alarms should an instrument stop working correctly) and so on. A big part of my role here is to write all software and scripts that deal with all those tasks – from collection and storage of data from the instrument, to sending the data to the central servers, to processing and visualising the data to finally sending the data back to BAS in Cambridge.

Around the same time, one of the last jobs for our team of Steel Erectors was to raise the CASLab building. Four of us from the Science Team went out to help with that task. As the annual snow accumulation at Halley is around 2.5m, all buildings, towers, flags, barrels and everything else that’s on the surface needs to be raised, otherwise it would get buried. CASLab is standing on four steel legs buried in snow, supporting a steel platform which the building itself is resting on. Each year the team of steelies needs to take out massive bolts which attach the building tight to the legs, and then four teams of people need to simultaneously winch the platform up (there’s one winch permanently attached to each of the legs and each is muscle driven!), following which the steelies move massive steel plates up a section or two on the legs, to finally bolt everything back together.

We also had a significant for Halley aircraft traffic, with a number of BAS Twin Otter visits as well as a few visits of the Polar 6. We even had three planes at one stage at the same time on the ground (and a total of four different plane visiting us at some stage of that week), which is a very rare sight at Halley International Airport!

Using the opportunity that the old Wintering Team is still on base, we set out one Tuesday morning towards Creek 3, which is one of the relief sites at the edge of the Ice Shelf, to do our Winter Field Training. This is a training session for all Winterers, and it builds upon the training we all received in the UK, at Girton Conference and at the Field Course in the Peak District.

The idea of the training is for all of us to learn to set up camp (pitching the iconic BAS pyramid tents, the toilet tent), learn cooking on the Primus stoves, warming up the tent with a Tilly lamp, experience sleeping in tents at -15°C outside and also practice linked travel, crevasse rescue skills, etc.

The Shack arrived for its final call on 16th of February to collect all stuff we’re sending back North (waste, unused and decommissioned equipment) as well as all Summer and previous Winter Staff and finally left on the 19th of February.

From this moment on, we were pretty much on our own and the Shack’s departure marked the beginning of the Winter Season 2014 at Halley.

As is the tradition with BAS, we all got up in the wee hours on that Wednesday morning, got into the two Sno-Cats and made our way to N9, some 40 km and three hours journey from our Base, to say our final good byes to our friends, watch the ship leave and take some pictures.

As Halley is so isolated from the outside world, and this includes outside help, particularly during the Winter Season, we have to provide help to ourselves. Apart from having a Station Doc, who can take care of us in terms of all medical needs, each year a number of staff are selected to form the SAR (Search and Rescue) Team. Typically the Team consists of people with a little more mountain, climbing or outdoor experience and includes both Science as well as Support staff.

The Team has been issued with their own climbing kit for the Winter (this includes climbing harnesses, carabiners, jumars, belay plates, prussik loops, etc), as well as all winter clothing. Also, we were given extra training, comprising:

The team can be called upon at any time should someone in our area need assistance, and that includes both BAS and other parties.

First round of Winter Trips

Finally the last week of February saw the kickoff of the first round of Winter Trips. These are important as part of the general survival training, but also give us a chance to be proper Antarctic Explorers. We were split into small groups of three people including Al, our Field Guide and set off, one group at a time, for a five day long trip (obviously, weather permitting).

On my trip we went towards the Hinge Zone (which is an area where the Ice Sheet descending from the continent reaches the sea and becomes the Ice Shelf) to a place called Alladin’s, where there is a massive Ice Berg “frozen” into the Ice Sheet, with some wind scoops around, a beautiful feature not dissimilar to a frozen pond and ice walls covered in fish-scale like features.

We practiced some ice climbing, crevassing, we explored the area on foot as well as on skidoos. All this is important part of our training, but also gives everyone a chance to recharge their batteries after a very busy Summer! 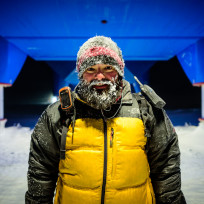