Fur seals in the Falklands – Part 2

Kayleigh Jones, a seal biologist at British Antarctic Survey, travelled to the Falkland Islands to spend 6 weeks studying South American fur seals. Read on to find out about camp life and the discovery of an unexpected predator on the island (View Part 1 here).

As it was winter there was limited daylight and the location meant we had little connection with the outside world. However, our camp on Bird Island was pleasant with a variety of activities to keep us entertained when we weren’t working with seals. Luckily we had radio signal, which meant we could listen to the Falkland’s radio and keep up to date with the latest news and weather forecasts. We also had a generator allowing us to work on our laptops and even occasionally watch films!

Amenities within the camp were very basic so we could not shower for 6 weeks! Our meals were simple but provided us with the energy required to carry out our work in the field. Breakfasts consisted of cereal, our lunches of Rye crispbreads or baked beans and our dinners of either spaghetti, curry, burritos or rice.

At our study site temperatures ranged from -2 to 12°C but the winds often made it feel colder. To keep warm in these conditions we used plenty of layers. One day it was so bitterly cold I wore seven layers! The weather was also very variable, ranging from blue skies and sun, to hail storms and gale force winds. On one occasion we were forced to take down our communal tent, as the storm force winds would have snapped the poles or torn the canvas apart. Despite the challenges, I thoroughly enjoyed getting stuck in to camp life and working in the field.

While waiting for our GPS tagged South American fur seals to return from their foraging trips, we spent many hours observing the colony. One morning Dr Alastair Baylis observed a male sea lion confronting a fur seal pup. It became apparent that male sea lions were also targeting adult fur seals. Predation between these species has rarely been documented.

The sea lions patrolled the water in front of the fur seal haul out site and sometimes raised their heads to scout out their prey. On several occasions we observed sea lions chasing and catching fur seals. But, we also saw many fur seals successfully navigate around the sea lions back to their pups. 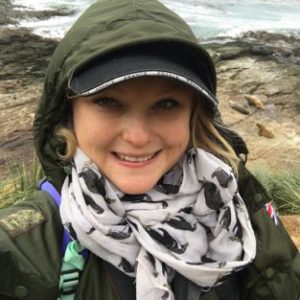 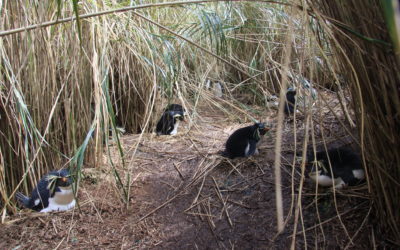 Monitoring penguins in the South Atlantic 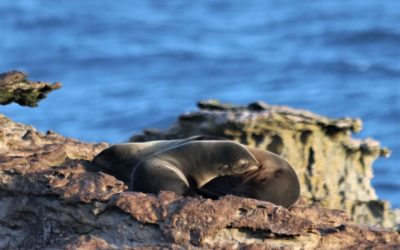 Fur seals in the Falklands – Part 1