After a fantastically festive celebration of Christmas & New Year, Bird Island is carrying on with its busy summer season. The saving grace of this very busy period was the beautiful summer weather we’ve had. This was not only great for the excellent views and happy moods but makes it a lot easier to carry out the field work.

Having monitored the fur seals twice daily since the 1st November to gather data on the breeding population, another special study beach (SSB) season is now complete for the seal team. Although the daily visits are finished there’s no twiddling of thumbs for Sian and Cian as straight away they’re out collecting data on fur seal pup weights, and recording how long some mothers are taking on their trips out to sea to find food. Things seem much more peaceful on the beaches now as the fighting fur seal males have gone back to the sea and their harems (groups of females and their pups) are splitting up and moving into the hills. After the mothers’ trips to feed they come back and locate their pups by moving from beach to beach screaming out to them. This is fascinating to see and hear, although less so when it’s the middle of night and outside the bedroom window.

Equally busy are the albatross ZFAs, Lucy and Jess. The albatross census is underway and all of the nests are being checked for eggs across the whole of Bird Island. This is no quick job and at times requires all of us on base to get up to the hills and meadows to help out. As base technician, it’s always a pleasure to get off base amongst the beautiful scenery and wildlife, but it’s made even better by being out in it and contributing to the research. The albatrosses are absolutely stunning and graciously zoom past on the wind.

The penguins, skuas & petrels team have also been hard at work with the monitoring of skua and petrel chick growth and gentoo chick weighing and counting. I really have to take my hat off to Alastair and Jerry for the latter, as counting penguins is no easy task! This is because the chicks like to huddle together in groups of hundreds and not in nice orderly groups of 20, so it is very difficult to keep track of which chick has been counted and which hasn’t.

Our new VHF radio repeater is in and working a treat thanks to Adam the SL. He’s been up and down one of our highest peaks like a yoyo carrying the new parts and bringing down the old. I had a go at bringing down one of the old batteries and it’s no easy task. I was helped back onto my feet on a number of occasions.

Bird Island base life has been absolutely great. Having 10 people around a table for dinner, chatting and joking, always makes for a great end to a hard day’s work. Our two senior scientists, Richard and Jaume, gave us evening talks on some of their findings. It was incredibly interesting seeing their results from data collected here on BI. Also, hearing about the albatross’ struggle against long-line fishing hooks, and the depletion of food sources for the seals, really brought home the importance of monitoring these animals. We were sad to see Richard and Jaume set off back home halfway through the month. However, our attention was quickly shifted to the arrival of Ines and Roland, a documentary film crew. They are back in South Georgia for their 3rd and final documentary on the rat eradication project, and were keen to get footage of Bird Island as it has fortunately remained rat-free. The whole base was involved in the filming and had their acting skills tested. One evening we had the pleasure of watching one of their previous documentaries and we were amazed at how brilliant it was and that even just a small crew of 2 people can make such a high-quality program. Their 10 day visit flew by — to send them off, Lucy put on a fantastic Burn’s night celebration including an energetic and laughter-filled ceilidh and the best recital of ‘Ode to a haggis’ ever.

It’s on with another busy summer month with plenty more data to collect and the arrival of the Ernest Shackleton to bring us more fuel and fresh veg. 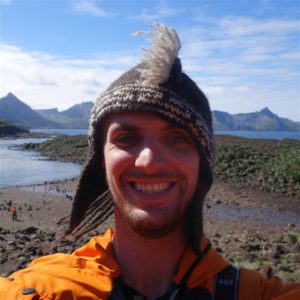