The first weekend of August was a busy one on Bird Island, as it was the date of this year’s Antarctic 48-hour Film Festival. The Film Festival has been running since 2008, and is an annual competition open to any base in Antarctica (or on the sub-Antarctic Islands) that wishes to participate. The object of the competition is to produce a short film, around 5 minutes in length, over the course of a single weekend. The film can be on any subject whatsoever but must include five elements, which are only revealed to participants on the Friday evening at the start of the competition. Each base then has 48 hours to write, film and edit together their movie, ready for submission on Monday morning.

Tension began to mount on Friday afternoon as we waited for an e-mail from the Film Festival organisers, signalling the start of the competition and providing a list of the essential elements to be included in the film. Eventually the message arrived and we spent a few minutes absorbing its contents. This year’s elements were:

Character: a queen.Sound: breaking ice.Dialogue: “I’ll save you”.Object 1: a computer mouse.Object 2: a map or your station or local area.The next step was a ‘brainstorming’ session, and within a couple of hours we had a loose idea of our plot and a very basic script involving the Olympics opening ceremony, James Bond and an evil supervillain with an army of genetically mutated killer mice (it’s a very highbrow story). Perhaps the trickiest scene that we had planned involved the death of one unfortunate character by decapitation. This would obviously require some severed-artery, blood-spurt special effects, and so our first task was to try and create some convincing fake blood and a mechanism for pumping it out of a gaping neck wound. After some thought we arrived at the solution — an out-of-date bag of saline from the medical supplies mixed with some cornflour and red food colouring. A sharp squeeze of the bag then produced a very satisfying jet of ‘blood’ from a small hole in one end.

Filming of the movie took place on Saturday and Sunday, with some fine displays of acting talent from the staff of Bird Island. Rob put in an excellent performance as James Bond, Jen was a star turn as Her Majesty Queen Elizabeth, and Jon bravely donned some fishnets and a blonde wig to play the sultry Bond girl. Meanwhile, I landed a role I have been dying to play all my life — an evil genius with a secret laboratory and sinister plans for world domination. By Sunday evening we had finished filming and the complicated process of editing everything together began. This took longer than expected, so it was not until around 4am that our masterpiece, “Quantum of Cybermice” was finally finished. The film is available on YouTube for anyone who is interested.

Once all films have been submitted, each base in Antarctica can download and watch them all and then vote for their favourite in each of five categories (Best Film, Best Screenplay, Best Cinematography, Best Acting and Best Use of the Elements). Sadly this year, despite our best efforts, we did not win any prizes. However, the Film Festival is not about who wins or loses, but about participating in a unique event which, for one weekend, unites people of all different nationalities across the entire continent of Antarctica. Would have been nice to win something though.

After the excitement of the Film Festival was over, it was back to work as usual for everyone. Jen and I have only a few short weeks until we both start daily rounds of the island looking for nesting birds, so August is the time to finish off the last of our winter lab-work before the busy season kicks in again. For Jen this means long hours of identifying squid beaks that were collected in the summer from albatross diet samples. These beaks survive the digestion process and allow us to identify the exact species of squid on which the albatross have been feeding. For myself lab-work currently involves processing blue-eyed shag pellets. Blue-eyed shags breed on Bird Island in the summer, and helpfully regurgitate any inedible parts of their prey in the form of a pellet, making the study of their diet rather easy. In the summer months I collect pellets from the ground around the shag colony and freeze them. Then in the winter the pellets are defrosted, weighed, measured and dissected. As well as squid beaks these pellets also yield otoliths (fish ear bones) which allow us to tell which species of fish the birds have been eating.

When not working in the lab, Jen and I have also been kept busy by the wandering albatross chicks. The chicks have been getting steadily bigger and fatter throughout the winter and are now starting to get their adult plumage, which means they are old enough to be ringed. There are nearly 600 chicks on the island, all of which must be ringed, so the task will take several weeks to complete. Like many seabirds, albatross chicks defend themselves by spraying any assailant with a foul-smelling oil, so it is easy to tell when one of us has been out ringing chicks by the interesting aroma which follows us around afterwards.

Throughout August Jon has continued his daily leopard seal rounds, patrolling the beaches of the island looking for leps and taking photos of any he finds so that they can be identified. This is the time of year when new leps start to show up — individuals that have not been seen on Bird Island before, and it is Jon’s job to think of names for them. Two new female seals have been spotted this month, and after much nagging and wheedling from us, Jon ‘decided’ to name them after the bird girls of Bird Island — the new seals will now be known as JJ (for Jenny James) and Margarita (from my middle name Margaret).

This month Rob has been kept busy as usual with everyday maintenance and repairs of the buildings and plant. There was some excitement in mid-August when high winds and heavy rain caused the building to spring a leak, and water started dribbling through the ceiling. However Rob quickly identified the source of the problem — the cover of an air vent which had blown off — and the leak was soon fixed. In his spare time, and in preparation for what will no doubt be a summer filled with glorious sunny days, Rob is building us a new barbecue, using an old 45-gallon drum.

But it’s not all work here at Bird Island, the relatively light workload of winter allows us ample time to go out and play too. Earlier in the month we took advantage of a heavy snowfall followed by a lovely sunny day to indulge in a spot of tobogganing. With the snow-covered mountains of South Georgia as a backdrop, we could not have wished for a more beautiful private piste. Another favourite pastime of mine is photographing the wildlife, and Bird Island is not short of wildlife to photograph, even in the winter. One of the most amazing spectacles here is the gentoo penguins coming ashore in the evening. There are several large colonies of gentoos on the island, and after spending the day feeding at sea the penguins gather offshore in huge groups before charging towards the land and scrambling up the beach en masse. Trying to photograph a high-speed penguin in low light conditions is challenging, but perseverance pays off with the occasional good shot.

That’s all for this month. As always, lots of love to my friends and family back home. 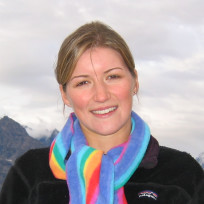