ARCTIC BLOG: It’s not all plain sailing at the top of the World

Three-and-a-bit days is what it takes to get from London to Thule air base in northwest Greenland. A quick flight to Copenhagen was closely followed by a plane journey to Kangerlussuaq in central West Greenland – a slightly surreal Arctic outpost with a grand total of three eateries and the same number of paved roads, but with surrounding hills reminiscent of parts of Scotland. After a night in “Kanger” we flew up to Thule where the Swedish icebreaker RV Oden – a blue and yellow monster of a ship more than 100 metres long with 5 stories above the deck level – was waiting for us. But that was nearly two weeks ago. Since then we have slowly made our way through the icy Nares Strait – the narrow body of water between Arctic Canada and Greenland and into Petermann Fjord itself.  If you’re not sure where that is, find Ellesmere Island in Arctic Canada in an Atlas and then look across to Greenland and you will soon spot Petermann sitting close to the top of Greenland. At first we made good progress on Oden as we headed through Nares Strait but then we spent several days finding a circuitous route through the sea-ice that was filling up or choking the strait as winds blew it in from the Arctic Ocean to the north. We have two helicopters with us on this trip and the captain and chief scientists flew out several times in the early mornings on reconnaissance missions to plot the best route for the ship to follow as we broke through.  And then, after several days of transit in and out of sea-ice floes with incredibly blue meltpools on their tops, we finally made it in to Petermann Fjord.

We are up here to investigate how Petermann Glacier, which drains about 6% of the entire Greenland Ice Sheet, behaved over the last 15,000 years or so since the last great ice age.  This kind of work is hugely valuable because understanding how this massive glacier responded to climate change in the past sheds light on how it may respond to ongoing warming today. In order to do this we will use a variety of geophysical, geological and oceanographic instruments deployed from the ship to collect data from the seafloor to trace how the glacier ice advanced and retreated in the past, and how it interacts with the ocean at present. There are also several science teams being deployed by helicopter to the surrounding land areas to collect records of environmental change there. In this way, we can get a comprehensive view of this glacier system.

My role – as a marine geophysicist – is to help acquire and process geophysical data from the seafloor in Petermann Fjord and Nares Strait. Using instruments mounted to the hull of our ship we collect data to generate 3D maps of the seafloor and image or “look into” the mud, sand and gravel layers below.  What I do is intimately linked with other scientists on board who want to collect seafloor samples and oceanographic data in optimal locations. So far the data is excellent and is pouring in at high speed, almost too fast to process it!  But we are getting some spectacular results and the scenery ain’t half bad either. In fact, the ship even attracts its own special visitors: a polar bear came to the ship one morning around 4 am and placed its impressively large paws right on the ship! As I said, it’s not all plain sailing up here…but mostly it is. 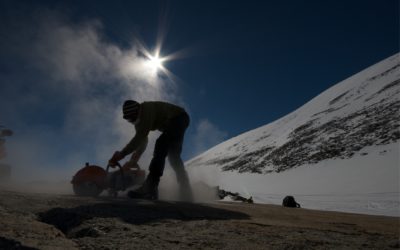