We are back down south again in the Weddell Sea once again involved in the annual Halley relief operation.

We departed Immingham in the UK in early November and had a pretty uneventful trip south to Cape Town. The weather in Cape Town was glorious and all on board made the most of it, exploring Table Mountain the beaches wine farms and the Waterfront area. It was over all too soon and once again we headed down south departing on the 13th December. 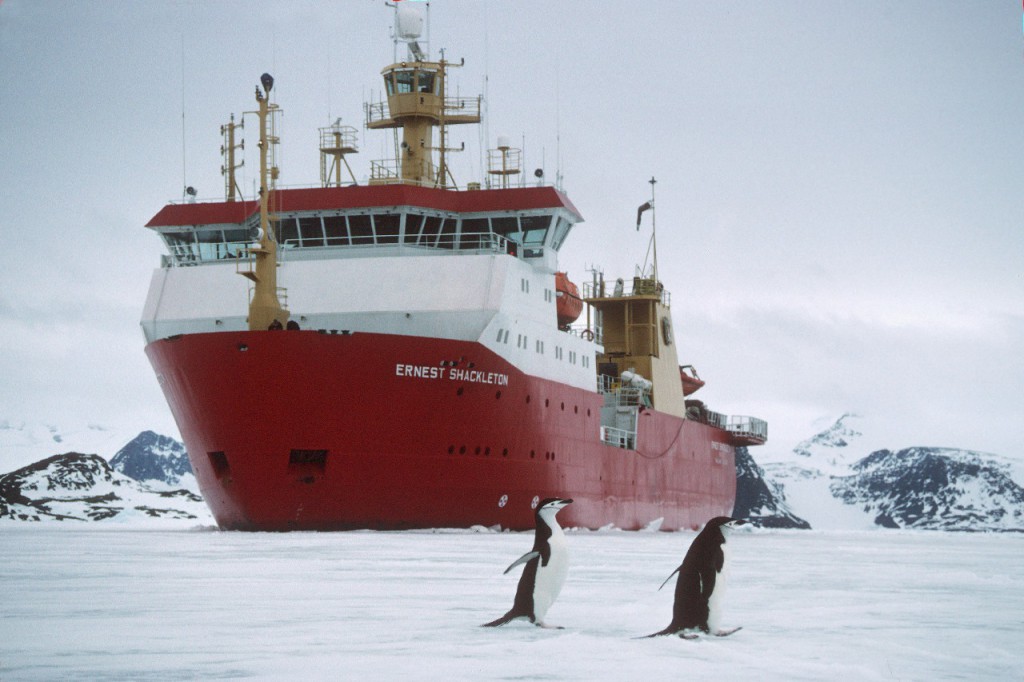 We were instantly greeted by the Cape Rollers, long period swells that come in from the southwest, a portent of things to come weather-wise. Quite soon there were a few customer’s knuckling the Doctors’ door for the remedial medication. The lumpy weather, although not severe continued pretty much until we passed Bouvet Island and turned directly south. We encountered our first ice at about 58 South. Once in the pack the vessel motion settled down. We were In radio contact with the South African Vessel the SA Agulhas which was headed for Atka Bukta near the German Neumeyer station. They informed us of some of the sticky patches that they had encountered along the way which endeavoured to avoid.

We finally broke through to the shore lead on the 24th December and cruised quietly along the ice shelf  in a Westerly direction heading for Halley. Initially the Satellite picture we were receiving indicated that a huge iceberg may be blocking our way at Stancomb Wills ice tongue which juts out  substantially from the coast. However as we approached the berg was seen to drift off leaving us a gap to sail through and on to Halley.

On Christmas Day we stopped for few hours in the ice and everybody was afforded the opportunity to go for a stroll on this strange new surface. The Weather was lovely with a dark moody sky in the backgrouand. Some of the lads even took a soccer ball along to kick about. A lone Adele penguin came to greet us and was snapped at like a super-model by voracious paparazzi.  We also managed to get everybody together on the ice for a Christmas day team photograph.  Thereafter we sat down to an excellent traditional Yuletide Feast thoroughly enjoyed by all.

In the afternoon we pulled off the ice and headed for Halley making speed to arrive early on boxing day for the offloading to commence.

We arrived off Halley mid-morning and were greeted by a well laid out and prepared ramp and berthing area. We made our way in through some first year ice which was still clinging to the older more substantial stuff against the shelf.  Last year’s mooring posts were still in place and we duly tied up alongside.

A contingent from Halley came down and gave us a briefing on the do’s and don’ts around the ramp.   Thereafter cargo work got underway. This year we are not doing round the clock work, just one daily 12 hour shift.

News from the base and new build at HalleyVI was eagerly awaited. It appears as if there are still some problems to sort out at the new base before it be safely commissioned for occupation over the coming winter. We are all hoping that these problems can and will be sorted out.  Nothing it appears comes easily down here.

All too soon New Year ’s Eve was upon us and the cargo work almost complete. There was not too much fuss made on board for this. A gathering on the bridge with some mulled wine and ringing out and in of the New Year by the oldest and youngest crew members.

The first day of January sees us continuing with cargo back load. We are looking to get away from here on or about the 3rd January

Wishing all a Happy New Year 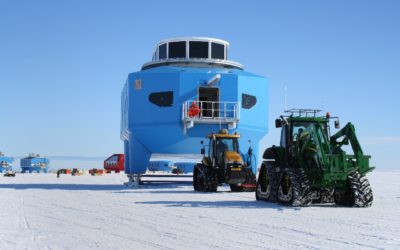