Life on Signy Island has been pretty hectic for the last couple of weeks with multiple ship visits, saying goodbye to old colleagues, welcoming new base personnel and, in between, doing my “day job” of studying the effects of climate change on Gentoo, Adélie and Chinstrap penguins.

In Antarctica you never really know what the day will bring so polar scientists like me have to be able to wear multiple metaphorical hats! In a single day I might be a plumber’s mate, an electrician’s assistant, a cargo worker, a chef/baker, and finally a night watchman to ensure the base is safe whilst everyone else is asleep!

On the days when ships call at Signy many a “hat” must be worn as everyone on base has lots of different jobs to do all at the same time! Before the ship arrives the Elephant Seals, who have taken a shine to our jetty, have to be persuaded to move so we all become seal wranglers. It is like herding sheep, except they weigh more than a ton, are longer than some cars, have sharp teeth and really do not want to move! Once the ship arrives, we switch to dock workers hauling large boxes of cargo onto the jetty to be craned into the tender for transport to the ship. Passengers are always keen to come ashore at Signy, so we don our tour guide hats and take them for a walk around the island and show them the wonderful wildlife – we are rather proud of our little home! Once our visitors are truly sold on Signy we change to shop keepers and sell them our “range of high quality branded products”. Seeing so many new people all at once (normally there are only 8 of us on base) is quite strange and it can feel a little like we are a zoo exhibit with visitors coming to see “the small Signy tribe that live on a tiny, isolated island for months on end with only penguins and seals for company”!

Even when it comes to my day job, no two days of work are alike. We walk the same route to the “office” – the penguin colony at Gourlay Peninsula – every day, but the landscape and weather are ever changing so it almost feels like you are seeing it for the first time every time. The penguins and seals are also always doing something different and provide hours of entertainment and work! Each year all of the seals on the island are counted to monitor their numbers and this involves the whole base covering the entire island by foot. Although Signy is a small island this is quite a task as none of it is flat and the centre is an ice cap, which is challenging to cross. We did the count at the beginning of this month and it took us 3 days to count over 12,000 seals.

We still manage to find time to have a bit of fun and build snow penguins though! 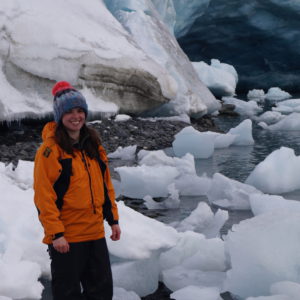 Polar ecologist prepares for the ice – Blog No 2