Tom Jordan is part of the PolarGAP project, an ambitious international collaboration which will use airborne geophysics to explore one of the last known frontiers on our planet – the region around the South Pole. The main aim of this European Space Agency (ESA) funded project is to collect gravity data, completing a global model of the Earth’s gravity field which, away from the poles, is derived from satellite observations. The project will also make measurements of ice thickness and the Earth’s magnetic field to reveal the mountains and valleys under the ice, and the geological processes which created them. For more information see the project page.

Tom is now heading out to the field and here he takes us through his journey south and his plans for conducting aerial surveys in the heart of Antarctica.

After more than a year of planning, months of preparation, and weeks with a growing pile of essential field kit on my spare room bed the PolarGAP field campaign is starting, and I am finally heading south to Antarctica. I have already been traveling for almost 36 hours; first from Heathrow to Madrid, then overnight to Santiago, in Chile, and finally to Punta Arenas. From here, together with other members of PolarGAP and several other BAS projects, we will catch the BAS Dash 7 aircraft for our final leg south to Rothera Research Station on the Antarctic Peninsula.

Once at Rothera we will start work in earnest on the PolarGAP field campaign. Our first task will be to turn VP-FBL, one of the BAS Twin Otter aircraft, from a logistics/passenger plane into a geophysical survey aircraft. Once this is done and test flights have been carried out locally we will head towards our first deep field camp, known as FD83 (Fuel Depot at 83°S).

My role in the project is field science leader. This has involved working with the project PI’s on flight planning and preparation of the routes that the survey aircraft will fly. Once in the field I will be working with the pilots to work out the optimal flight pattern and how best to adjust our plans in response to changing weather and time constraints. I will also be checking that the plans so carefully created back in the office match the realities of actual field work in terms of distance flown and fuel used. I am also responsible for the implementation of our environmental impact and health and safety plans, and will be flying as system operator on many of the missions.

The other part of my role in the field will be working with the other team members to bring together and assess the first quality control images of the gravity, magnetic, radar and LIDAR data. This is without doubt one of the most exciting parts of my job as a scientist. No human has ever been within 200 km of many parts of the region we are surveying, meaning this is one of the last truly unknown regions of our planet. Even our quality control data will give us new insights into the region and allow us to think about new  models of how it evolved on time scales measured in both millions to  billions of years, to hundreds or thousands of years. Being the first person to have this new view of part of our world is a real joy and privilege. 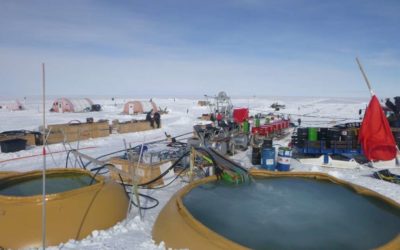