After our extended period of lie-up, I now have the slightly surreal pleasure of sitting at Rothera writing this, contemplating flying home tomorrow. We flew back from the field on Sunday, after a hard 24 hours of packing up in strong winds, digging out fuel drums from depots, and camping in lightweight mountain tents near Pine Island Glacier….. I feel a little bit sad because the past 8 weeks have been an amazing time and I am sorry to leave, but I am also really excited at the prospect of working on all the rocks and data we have collected. Looking forward to the future, and back to the past, is part of my job as a geologist.

I first set foot in this part of Antarctica – the Amundsen Sea Embayment – in February 2006.  I was participating in a research cruise on the German ship, RV Polarstern, and was helicoptered to the summit of one of the mountains here, Turtle Rock. Back then, this place left a big impression on me, but little did I realise that I would return to that same summit 10 years later. As far as I know, no one else has been there in the intervening time.

Over the past 10 years, scientists have made incredible progress in increasing our knowledge of ice sheet change in this area. When I visited in 2006, RV Polarstern was one of only a handful of ships that had ever sailed into Pine Island Bay. My colleagues on that cruise carried out many of the first geological and geophysical measurements in the region. Glaciologists have ascertained that, since then, glaciers here have retreated several kilometres inland (the most extreme being Smith Glacier, whose grounding line has retreated by 35 kilometres since 1992) and are now flowing much faster, discharging more ice to the ocean. The Thwaites Glacier catchment – of which our field site is part – was predicted in a recent study to make up 58% of the Antarctic contribution to sea level rise by the year 2100. Standing by the edge of the Crosson Ice Shelf – as I did just a few days ago – contemplating how far the grounding line has retreated there in recent years was, for me, a sobering moment. But what we don’t yet know is how these seemingly dramatic changes fit into the longer-term story of this area: have such rapid changes happened here before? If so, how long did they last? These are some of the things that Steve and I are hoping to discover.

Seeing Turtle Rock from the bottom this time – rather than the top – left a totally different impression on me. It looked daunting and dramatic, towering above us with mist rising between columns of dark volcanic rock. I wondered how I would ever climb up it. To my delight, however, the lower section was strewn with boulders and cobbles left behind by ice that has since retreated. It was a cosmogenic dater’s dream come true! We climbed up the scree on the side of the peak, making our way up using a static rope for safety because there was a steep cliff not far below us. Turtle Rock is in fact only 720 metres above sea level at its summit and doesn’t require any technical mountaineering skill to ascend, so it was easily within my and Steve’s capability, especially with the help of our brilliant field guides, Al and Iain. I enjoyed the ascent because the view was fantastic and all around us were dainty white snow petrels swirling in the breeze like little doves.

I was lucky enough to be able to work alone for part of the day; Cheese was not far away but deemed the weather and terrain safe enough for me to work without his usual assistance. It was lovely to get a few moments to myself – rare when one is sharing a tent and working together almost 24/7. I discovered fewer and smaller granite cobbles on the higher parts of the mountain than at the bottom, but I found them perched most of the way up to the summit. They must have been transported there by ice – probably by Pope Glacier that flows right past Turtle Rock – because granites are not found outcropping anywhere nearby. Finding them close to the summit shows that the ice sheet must have completely submerged Turtle Rock at some time in the past.

Visiting Turtle Rock 10 years on has been very satisfying from both a personal and professional perspective. For a start, I climbed it myself this time! But perhaps more importantly, back in 2006, I did not manage to collect more than a handful of rock samples from Turtle Rock because I had only a few hours there. This time, we were able to collect enough for a really detailed study. I now have high hopes that we will be able to reconstruct a detailed thinning history of Pope Glacier over the past 20,000 years that will significantly improve models predicting future sea level rise. Much hard work lies ahead. Right now, we are enjoying getting back to civilisation: flushing toilets, showers, chairs, fresh food….. we have many happy memories to savour, and lots to look forward to! 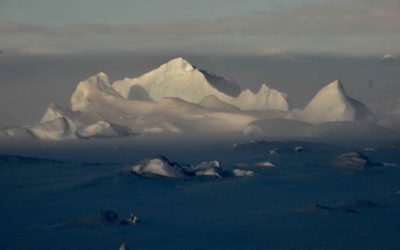