October is another busy month for bird work, with the feathered residents of Bird Island all returning and starting to breed.

Almost all of the Northern giant petrels are now on eggs. With over 300 pairs in the study area I have plenty of ring numbers to check so that we can identify the male and female of each nest. The Southern giant petrels have also just started to breed, they lay about a month after the Northerns, and there are only around half as many.

Penguins on the island have been busy recently. The gentoos have been laying eggs, their nest is a carefully collected pile of stones, and often bones too, with the mud that generally accompanies their colonies it’s tricky finding a clean one to photograph! On one of my monitoring days I was lucky to discover a completely white (leucistic not albino) gentoo, the only completely white gentoo I’ve ever seen. Macaroni penguins have also been returning to their colonies. I spent a couple of weeks monitoring their arrival by counting them each day, not so bad when there are a few hundred, but once they hit the thousands it gets quite tricky!

Lucy has been continuing her work with the black-browed and grey-headed albatrosses, with both species laying eggs. The light-mantled sooty albatrosses are also back. They have a very distinctive call, all at once a beautiful, mournful and slightly haunting cry. They are very beautiful to watch, almost effortlessly gliding back and forth along the cliffs, especially when they perform their synchronised courtship flying.

The prize for the earliest chicks on the island goes to the South Georgia pipit. Despite being our smallest bird they have already laid their eggs and they have now hatched too! All this when the weather is barely above freezing, there’s still snow about, and I’m writing this with a gale and blizzard outside!

October is the last month of the lep round (leopard seals), and Melvin has still been hanging around on Freshwater beach in front of base. On my way to one of my study gentoo colonies there has been a moulting king penguin, at last it finished the process and headed out to sea. Unfortunately, it wasn’t counting on there being a leopard seal waiting. Nature can be pretty harsh at times, and I watched for over half an hour as the two of them diced with each other, the lep attempting to drown the penguin, and prevent it from escaping back onto the rocks. Eventually the lep had his dinner though, and I experienced a mixture of relief and amazement at witnessing the event.

As hoped for by Siân last month, female elephant seals have arrived on the island. The first two arrived at a beach at the far end of the island and have now given birth to their pups. Fortunately one also appeared on Landing beach, about 2 minutes from the base, it has also given birth, and the pup will quickly get fat on the rich milk from its mother.

Things have been busy around base too. Robbie has been giving the sprinkler system some attention; draining, cleaning, and filling it with fresh water, and also writing detailed instructions for the new fire alarm system and other areas of his job. On top of this we have been really lucky to have Robbie’s assistance with various science tasks, marking albatross nests, and weighing penguins to name just two things he has helped with. It’s really great to have a technician with an interest in the wildlife and the work we do.

With the ship arriving in a few weeks I have been busy preparing cargo to go out on the ship. This includes all the recycling and waste generated over the winter, which fortunately isn’t too much, and all sorts of other equipment that is no longer required here. Packaging everything up and making sure it has official paperwork and labelling certainly takes some organisation, but it’s all going smoothly so far, and we are looking forward to the ship arriving and welcoming new team members to the island. 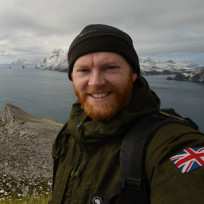