A British Antarctic Survey team has just returned from a three-week science cruise with National Geographic on board the RRS James Clark Ross around Ascension Island’s seamounts. This five-part blog, today by molecular ecologist Will Goodall-Copestake, provides an insight into the vital role of scientific research in informing conservation policy.

Seamounts are hotspots of biodiversity within our oceans. The science team on this cruise are surveying the biodiversity around three of Ascension’s seamounts (Harris-Stewart, Grattan and Un-named) using a variety of methods. Underwater photographs and videos provide us with a direct measure of marine life, while acoustic surveys are used to indirectly assess this life over much larger spatial scales. These methods are excellent for extensive surveys because of the limited disturbance they cause. Nevertheless, it is also often necessary to directly sample biodiversity as well. Direct sampling allows us to ascertain if what we infer through images and acoustics really is what we think it is. It also provides the raw material required for assessing the flow of energy from primary producers like algae, through successive consumers from zooplankton to small fish, right up to top predators such as sharks.

As part of the direct sampling campaign during this Ascension cruise, we have been collecting zooplankton using a narrow mesh net at locations that complement the image and acoustic survey sites.

Compared to the Southern Ocean, which is frequently dominated by large animals like Antarctic krill, our catches from the tropical mid-Atlantic have been dominated by small aquatic crustaceans called copepods.

Predatory arrow worms and Siphonophores (the group to which Portuguese Man o’ War belongs) are the next most abundant zooplankton groups we have encountered, with levels of other types of zooplankton occurring at much lower densities.

The catch from each plankton net is preserved for detailed analysis back at BAS in Cambridge. However, we have already had the opportunity to study some of this material in more detail during transit time between sampling stations. We are all excited to discover that two of the gelatinous zooplankton caught do not exactly match previous species descriptions – they may represent unrecognised variation within currently known species or perhaps even undescribed species new to science. One of these types of plankton, known as a salp, bears five pairs of luminous organs down each side of its body – see picture below.

Discoveries like this underline the unique nature of the mid-Atlantic location we are currently working in, as well as the importance of the multi-disciplinary survey work the science team is carrying out. Taken together, the data from our  surveys will provide a measure of the state and health of the marine ecosystem around Ascension’s seamounts. This can then be used to guide the conservation of this charismatic natural resource. 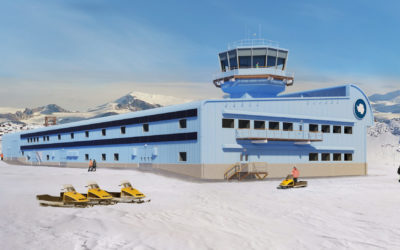 Towards Net Zero: demystifying the terminology