With many of our species finishing breeding for the summer season winter has truly hit Bird Island, and the freezing temperatures and thick snow certainly emphasize the season we are now in! But although we have concluded monitoring for many species there is still plenty of work to be getting on with and even more fun to have; here is what happens in a typical week for winter on BI.

On Monday I completed the geep bird work for the year by typing the final results into our databases. Whilst there was still one chick left at this point I could upload all the data and just adjust for the final chick when it does fledge. Our online databases link directly back to BAS Cambridge where our managers can review the years’ data.

Of course it’s difficult to stay inside all day, even when we are firmly in the grip of winter, as there is so much wildlife still around. So I spent a short time in the afternoon just out in front of base with some kelp gulls and Antarctic terns feeding amongst the kelp.

In just a few weeks time we will be celebrating midwinter. This is a big celebration each year, partly because we are generally too busy around Christmas to get the full holiday spirit going (although Christmas was a lot of fun!) and partly because there are a few events that bring all bases on the continent together at this time. To start celebrations we have our annual “Secret Santa” type arrangement where we all make a gift for someone else on station to open at midwinter. This is a great reason to fully utilise our workshop and get busy with some woodcraft!

After putting some final touches to my midwinter gift it was time to get in to the lab and begin some identification work. The krill, squid beaks and otoliths (fish ear bones) collected from macaroni penguin and geep diet samples through the summer now have to be measured to identify sex, life stage (krill only) and species (squid and fish). By doing a few hours a day a few days a week the lab work is completed in plenty of time for the final season reports (in August) without us getting stuck in there for too long at any one time – staring through a microscope at tiny bones gets a bit draining!

The wandering albatross raise their chicks all through winter and as such we are never fully deserted of wildlife to monitor. The first of each month, until September, marks an all island wanal census where we go out and check that each nest is still active, recording those that have failed in the preceding month. The chicks are now getting noticeably bigger and filling up their nests very nicely!

I covered an area on the east side of BI with the furthest wanal chick being all the way on the point of Farewell Point, the eastern extreme of the island. This is an area we get to rarely as there is little survey work on this part of the island, so it is always amazing to be able to get out and see a different location occasionally.

During the census Ian actually confirmed the final geep chick to have now fledged! Goodbye chicks, good luck! Now it is a case of waiting until September for the breeding season to start anew.

Now that there are just four people on base the cooking rotation comes around quicker than before. Thursday was my shift this week and whilst we are obviously lacking in the fresh food department we are certainly not restricted when it comes to frozen or dried foods.

The cooking rota can sometimes be a bit of a pain, but that is when simple meals like baked potatoes and pasta pesto come in handy. Other times it is a great opportunity to experiment and try something different as during winter we generally have a bit more time to prepare. The quality of food served on BI has been very high and much more varied than I expected to be possible before coming south.

During summer every meal was eaten at the table. But during winter we have weekend meals at the table but during the week we switch to TV dinners, often followed up by a bit of Mario Kart on the Wii.

Friday is our scrubout day. The station is divided into sections; boot room and toilets, kitchen and foodstores, living room and offices, lab and waste management. We rotate through these jobs each taking a different area each Friday and giving it a good clean. The station is well kept and these regular scrubbings makes sure it stays that way.

Besides all the work done during the week and the ways we relax in the evening there are times during winter when it is quiet enough to have a bit of a slow afternoon. When this happens it can be filled with any amount of hobbies. There are puzzles and craft books on base, a whole bookcase full of novels to read, the workshop is always available for projects to be done and of course there is whatever we brought down ourselves to keep us entertained. So I spent Friday afternoon reading James Herriot and colouring in some Zygons! Not a bad way to relax!

Saturday is a day we always make sure to put a bit extra effort in to doing something as a group. This is particularly helpful during the summer when we are all so busy with fieldwork that we may not spend that much time with other people. But the tradition continues through winter with Saturday being a three-course meal and can be a themed night (although not always).

We usually follow up the meal with a game of some sort, sometimes this is cards or a board game, other times it can be a pub quiz, dance night or some other game we have designed and built for the station. From cornchucking to murder mystery, lightsaber battles to monopoly, stargazing to rummy we have done quite a few different things over the previous weeks and months; and this week James was on Saturday cook and set up a great meal and some fun card games.

Once a fortnight there is another survey to keep me outside with the wildlife, the pintail and sheathbill count. This is conducted along a stretch of coastline either side of base and usually takes about two hours, walking along the cost and counting every sheathbill and pintail along the way.

This gives us an indication of wintering populations for comparison to work ongoing at King Edward Point and the work they are doing there after the rat eradication project (Bird Island was already rat free and so can be a control location).

When it has been snowing quite a lot then the tussock grass gets hidden under a blanket of white. This makes it a lot of fun walking around between places, crunching in the snow or sliding down slopes. Of course we are always in danger of not seeing a gap below the snow and falling through the tussock!

The pintail route along the coast is the same as the leopard seal route, so whilst counting ducks and sheathbills we also keep an eye out for leps. These guys are absolutely massive, the largest getting up to 3.5 metres (males) to 4 metres (females) long! It is great seeing such a well developed predator up close.

After work it is always nice to relax and every Wednesday and Sunday are film nights. We are lucky enough to have a projector hooked up to our TV on station and so have our own mini-cinema for these occasions. Whoever is on cook gets the film choice that day so everyone gets a fair share of picking the film, this week it was Ian’s choice and we watched The World’s Fastest Indian which is a great film! 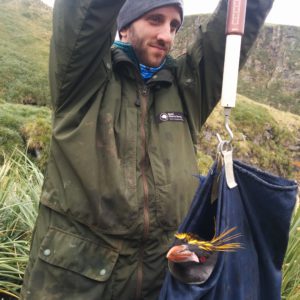 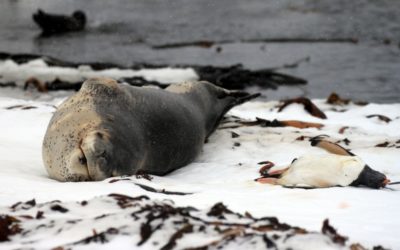