Scientific research began on Signy Island in 1947 when a three-man team occupied a site in Factory Cove above the old whaling station. The base they established was called Signy Island, known as Signy from Aug 1977.

George Powell and Nathaniel Palmer, British and American sealers, discovered the South Orkney island group in 1821. A few years later, Matthew Brisbane, as part of an expedition led by James Weddell, surveyed the south coast of Coronation Island and discovered Signy, although he did not name the island. Powell named Coronation Island to celebrate the crowning of George IV. Visitors to the islands were rare until 1902 when the Scottish National Antarctic Expedition, led by William Speirs Bruce, established a base on Laurie Island. However, in 1904 the British Government declined to support the expedition and the base was handed over to the Argentinians who have remained there ever since in what is now known as Orcadas Station. Whaling started in the South Orkney Islands in 1907–08. Petter Sørlle, captain of the whale catcher Paal, surveyed the island in 1912–13, naming Signy after his wife and a number of the surrounding islands after his daughters.

Occupied continuously for a total of 49 years 27 days.

The original building was erected on Berntsen Point, overlooking Factory Cove. It was named Clifford House after Sir Miles Clifford, Governor of the Falkland Islands 1947–1954.

A laboratory was added on 12 Feb 1948 and an extension to the main hut on 25 Feb 1950. The latter building had originally stood at Admiralty Bay (Station G). These buildings were re-sited in Factory Cove. The main building established on 3 Feb 1955 was named Tønsberg House after the whaling company Tønsbergs Hvalfangeri. It was established on the site of the company’s old whaling station at Factory Cove. Construction of a plastic hut containing living accommodation and laboratories began on 18 Dec 1963. A bulk fuel tank was built in 1965. Sørlle House was erected Dec 1980 to house diving and laboratory facilities. It was named after the Sørlle family – Petter Sørlle was the whaling ship Captain who surveyed the South Orkney Islands 1912-13. It was demolished in Mar 1995. During the 1995/96 season a new Sørlle House was erected on the foundations of the old, providing improved living accommodation, laboratories and offices, and a fuel farm established. In Jan 1997 the plastic hut was closed except for use as a store.  During the 2001/02 season the plastic hut, Tønsberg House, 1965 bulk fuel tank and pump house were demolished. 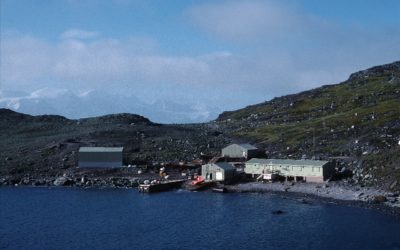