History of Port Lockroy (Station A)

The ionospheric work was transferred to Argentine Islands (Station F) when Station A closed.

The main hut was named Bransfield House after the ship initially chartered to transport members of Operation Tabarin from the UK, and itself named after Edward Bransfield, Master, Royal Navy, the first person to chart an area of the Antarctic mainland (1819–1820).

Designated as Historic Site No 61 under the Antarctic Treaty, 19 May 1995. Restored 14 Jan 1996 – 18 Mar 1996. Since Nov 1996 the station has been manned as an Historic Site on behalf of the UK Antarctic Heritage Trust (UKAHT) for the benefit of tourists and visitors during austral summer seasons. It has been operated directly by UKAHT since Jul 2006 under a Memorandum of Understanding with BAS. Inspected for BAS by a conservation architect in Jan 2007.

For the full listing of all station histories, see History of British stations and refuges. 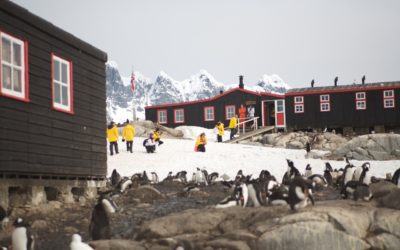